In one frightening moment

after peering into the foreboding opening of an ancient well, thirteen-year-old Zoe finds herself pulled by a strange force down into its liquid depths.  Trapped and completely alone, she cries out to a God she is not sure exists.

Out of the darkness

a tiny balcony suddenly appears, softly illuminated by flickering lanterns.  Where did it come from?  It wasn't there before!  And where does it lead?

In the midst of another world,

she is faced with the biggest decision of her life while pitted against a powerful evil that seeks to destroy her. 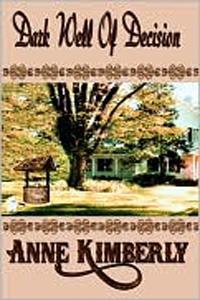 Zoe is looking down a well on her grandmother's farm; suddenly, she falls in. When she cries out to God for help, He sends Kristo and Kitia. Ophis is determined to steal her soul. Can she resist the temptations that he offers?
Dark Well of Decision has strong Christian overtones. Anne Kimberly weaves a beautiful tale of fantasy. Dark Well of Decision uses biblical stories throughout her plot. In simple terms, she explains our relationship with Jesus Christ. I am reminded of the song "The Name of Jesus." Both adults and children will enjoy Dark Well of Decision.

Like the Lion, the Witch, and the Wardrobe, Dark Well of Decision is a grand adventure with a likable girl who is a little like all of us. Zoe's insecurities are realistically drawn and her struggle with both her faith and the new direction her life will take is poignant. The secondary characters are engaging and add extra "spice" to this story. The references to the Bible and the teachings presented are appropriately captured. Author, Anne Kimberly is an author to watch; her gift for penning a grand childhood adventure is a great one. This one is well worth the time and money spent; I will buy several copies for friends and family.

incident in the author's life. (Intriguing, right?!) I hope to interview Anne to get to the bottom of this! Basically, this is the story of a girl named Zoe who falls into a well. What she finds in that well. . .and who she meets. . .will determine the direction of the rest of her life. The story, which is both fanciful and (at times) mysterious, reminded me a little of Alice in Wonderland. It also put me in mind of several other fantasy/allegory-type books: Dante's Inferno, Pilgrim's Progress, Chronicles of Narnia, etc.
There is a clear salvation message in this book, and I think it would be great for both upper elementary and teens, as well as adults. In fact, I think this one would be a fine addition to Christian school libraries and home school libraries. Well done, Anne!

Janice Thompson, DoubleBookedJanice.blogspot.com
~~~
Anne Kimberly's amazing novel Dark Well of Decision is a powerhouse of a novel. Zoe is an extraordinary girl, who struggles with her faith and her unfamiliar thoughts and emotions on becoming a teenager.
Dark Well of Decision showcases this authors' outstanding ability to combine both the bible and its teachings, with a young girls awakening to adolescence and finding the courage to put it all together, the secondary characters really bring this poignant story together.
Anne Kimberly's first novel is one I will treasure and buy; it shows one that believing in God can make our lives fuller and richer! This is a novel to buy for a loved one, even you, but don't just take my word for it, give it a try.

"Do not fear, dear one," he said. "I am not here to hurt you, but to help you."  He smiled reassuringly while his eyes studied me. "But there is one thing you must promise me," the little round man said. "Since you have been granted the special ability to see me, you must be faithful to tell others about your experience, so they too might believe."

"No, no child. Why, in God of course," he replied. "You did cry out to Him from your heart, did you not, and ask Him to help you?"

"It was He who answered your prayers and opened your eyes to see what was before you all along, because up until then, it was hidden from your sight. Your heart was not open to believe it," he stated, repositioning his spectacles on his nose. "These things must be seen with spiritual eyes.

"Well, are you willing?" asked the little man as he gave me a searching look.

My mother and father taught me to be sincere and to keep my word and I felt the importance of that lesson as I considered the little man's question.

"Yes, I am willing," I said with all the sincerity I could muster.

A big smile broke out on his face and his straight, white teeth gleamed in the darkness. "Well done," he said. "Now, first things first. We must get you out of this cold water."

No sooner had he spoken than a little round woman stepped through the door onto the balcony and joined him. Her stature was about a head shorter than the man's, but a tad bit rounder. She wore a long, green dress the same color as the little man's pants, like dark green leaves. A bit of white petticoat peeked out from the bottom of her dress above her little brown boots. Her gray hair was pulled back in a neat bun and she too sported little round glasses. I estimated them to be about seven or eight inches tall, the same height as my baby geese when they first hatched.

With a large cup in her hands she stepped forward to the edge of the balcony. She held it out to me with a kindly smile, and said, "You must drink, my dear. It will not harm you."  Her voice had the same soothing quality as the little man's and I felt I could trust her.

What was a large vessel in her hands was ever so small to me as my hands were so much bigger in comparison. Mine shook so badly, it was with some degree of difficulty that I took it from her tiny hands. I peered at the contentsa shiny, golden liquid that popped and fizzed as it swirled around. After staring at it for a few moments, I looked back at my tiny, new friends. They conveyed encouragement for me to drink in the form of smiles and slight uptilts of their heads. I knew I had to trust them and in return managed a weak smile.

With trembling hand I held the cup up to my mouth, careful not to spill any of the contents. I tilted it up and let the shiny liquid flow onto my tongue. The taste was sweet as honey, and the popping, effervescent bubbles tickled my mouth.

Immediately a strange sensation beginning at my head and moving all the way down to my feet overwhelmed me. Just as suddenly, the little balcony with the couple standing on it was far away and very high above me.

Was I sinking?  Was the water leaking out of the bottom of the well?  How could it be that what I once beheld at eye level I was now looking up to see? Looking up at them?

Then I realized I wasn't sinking at all, but shrinking. Shrinking in size!  Soon, the well, which had previously seemed very close around me, looked like a giant cavern and I found myself floating on top of the water.