Korin is a slave—beaten and abused, but never broken. Every day she watches the soldiers of the Imperial Army practice and wishes she were one of them. One day, her slave supervisor attempts to blame her for the catastrophic loss of the army’s herd. In the resulting dispute, she accidentally kills him and flees to the army camp, where she is mistaken for a minor officer.

Thus begins Korin’s journey in the land of free men. She doesn’t ever want to return to her old life. When crazy Antiochus, a superior officer, takes her in and covers for her, she takes up her duties with a passion. All is threatened when a fellow slave recognizes and reports her. Will they call her bluff and engage in a sword duel meant to uncover her real identity? Worse yet, the last of the pureblooded demons, Vorak, has taken an intense interest in her. He suspects, like the others, that there is more to Korin than meets the eyes.

Could Korin’s uncanny strength and affinity for the night have a more sinister meaning than she realized? Could she be a demon? Korin must discover the meaning of her strange powers before she gets caught up in something she can’t control. 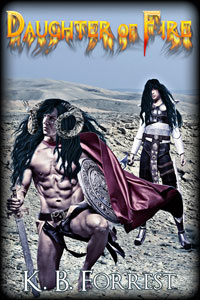 “Don’t you dare make a mockery of this army! You are a woman and a murderer.”

Korin gave him a condescending smile. “Am I? Well I didn’t notice much difference between you and me but as far as being a murderer, how could I deny that? I’ve bathed entire villages in blood.” She grinned at him and stared. “But maybe that mage would care to come back here and question me? If this was all so important that he convinced you to come out here, then why did he run away unless he was lying and knew I could prove it? Where are the people who say I’m a demon? The magi are forever cooking up stories to make themselves look important.”

Korin could feel the men bending under her persuasion. Their faces cleared of fear and all that was left was something Korin had never seen directed at her. It was the look Mogpaste used to give Master Sheed. Korin watched the men’s eyes shift from her to their leader. His brow creased uneasily.

“Curses! You lowborn son of a dog-eating pig-raper! I’ll have you punished for insulting me at the very least! Fifty lashes, and I’ll give them to you myself! We’ll see what’s under that breastplate of yours.”

Korin shrugged like it was of no concern to her, but she felt sweat break out on her upper lip and forehead. “You wouldn’t be the first man to want to disrobe me. I didn’t think that you were that kind of man.” Her smile was infectious and the guard behind the leader sniggered. “Then again I suppose it’s not surprising, considering that you’re under the control of the magi…I mean to say that you have a great respect for the magi.”

“You!” he screamed and launched himself at her.

Korin saw his body tense and danced aside as he came at her. He wheeled his arms to try to regain his balance. Korin couldn’t resist. Her leg snapped out and connected with his rear end. He bellowed like a herd-beast and landed in a graceless heap. Korin darted forward and kicked his ribs with her new stout boots, marveling at the added strength the tough soles gave her.

The man let out a squawk of rage and surprise.

“Oh the gods! He actually bested the general.”

Korin froze. She had no idea the man was a general. She knew she was in serious trouble now. She turned and sprinted toward the tent city. Korin looked back and saw that her boot print was stark against the black cloth that covered his rear as he turned, screaming at his men.

She entered the tent city, but immediately had to slow her pace or attract notice. She heard the distant scream.

“Seize him!” General Kayle yelled in a shrill voice that barely reached Korin’s ears. She slowed to a walk, wondering what to do.

Ahead, Korin caught sight of Antiochus and a lithe man with powerful shoulders. Her spirit leapt toward them like a drowning man seeing land.

Even in her state of agitation, she noticed the surprising grace in the way the man next to Antiochus stood. One hand confidently rested on the hilt of the long rapier at his side. His pale, almost white-blonde hair brushed against his shoulders, and his head was held at an odd angle that made him look dangerous. Korin saw the reason for the tilt of his head as she neared. A black eye patch arched down to cover his mangled face, making him even more handsome.

The man smiled at her. “So this is the young man who is in the center of all this?”

Suddenly, something hard struck Korin right in the head. She tottered, but under her helmet, her hair and the turban she’d wrapped around it cushioned the blow.

“You treacherous, dung eating, public fornicator! I’ll never let you live after what you said! How dare you?”

He swung wildly, but he was too winded and too furious. She dove for him and his fist flew wide, narrowly grazing her shoulder but missing her face entirely. Her fist, however, landed smack against his long nose. His own momentum made the blow even more painful. Korin felt the distinct crack even through her bull-hide glove.

Blood poured out from General Kayle’s nose as he reeled backwards. He fell to his knees, cursing, but above the horrible cries, General Daimos’ laughter filled the air. The people that had peered out of their tents at the sounds of the struggle continued to gather surreptitiously.

“It serves you right, you flea infested weasel, ” Daimos said, walking over to Kayle. He threw a glance over his shoulder and pinned Korin with his one blue eye. His grin was bright with rich amusement. “That was some fine work there, soldier. I can see why Antiochus values you.”

“You’ll regret this! Mark me!” Kayle screamed as he rose on his unsteady legs. He pointed a bloody finger at Daimos. “And you too. How dare you interfere? You and that wretched little mid-general!”