Tombstone Sherriff John Behan discovers a dying man in the desert who has the largest diamond John’s ever seen. Just before the stranger breathes his last, he whispers the name of the most desirable woman in town, Val McRae.

What does Val have to do with the dead man’s diamond and can John get to her before trouble finds her? 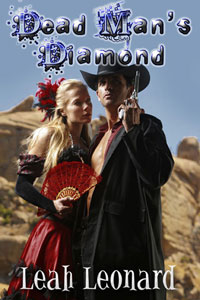 John followed Val across the smoke-filled bar, up the creaky wooden stairs. Her floral scent lingered in the long dark hallway. She led him into the room just above the saloon.

He closed the door behind them.

“Well, sheriff, I must say I wasn’t expecting this tonight…especially not from you. What exactly can I do for you?” Val began to loosen the satin ribbon ties on her corset that held her voluptuous body in place.

John’s gaze traced the lines of her neck and came to rest on the exact spot she wanted him to notice. He swallowed hard, stepped forward and pulled her close so fast he heard her catch her breath. Their lips brushed when he pushed her back toward the bed. I can’t do this now. It’s not why I’m here. I have to get a hold of myself.

“Well, if that’s the way you want it, sheriff.”

“How about this?” She walked toward him again, draped her long arms around his neck and kissed him before he could stop her.

John twisted her arms around, catching her wrists in his hands. He wanted nothing more than to do what she was tempting him to–throw her down on the bed and have his way with her as so many others had before him. “Not now, Val.” Maybe later…

He pushed her away again. “I said not now. Can’t you take no for an answer?”

She turned up her lip and pouted.

The ploy must have worked wonders for any number of men, but not him. Not now. Now he had to get some answers. He did his best to keep a strong, stern look on his face, not betray what he was thinking, or the urgency of it. “What do you know about a man named Steven Brown?”

Val visibly shifted when he mentioned the man’s name, although she looked like she was trying her best not to show any sign of emotion. For a split second, a strange and faraway look passed over her face.

She stopped pursuing John and looked away toward the window.

She stood silently, pulled the sheers away from the window and stared out.

John walked up behind her, stared down at the dusty street in front of the saloon where several men mounted their horses. He grabbed her shoulder, spun her around. “Do you hear me? Stop looking out that window and talk to me.”

“I hear you.” Val grabbed John by the vest and kissed him.

Her tongue ran over the stubble on his face, down his chin to his neck. John couldn’t control himself any longer. He held Val, nibbled his way down the tender part of her neck to the soft places where the salt on her skin mixed with her perfume. He stiffened.

Her hands ran all over his back, instinctively urging him to pull her closer. “Oh, sheriff,” she moaned. “I’ve wanted you to do that ever since I can remember.”

He responded by reaching eagerly into the available space between her corset and her bare skin. The fact she wanted him to take her made him know he couldn’t–at least not now. Not until he had some answers about the killer on the loose. Besides, she was almost young enough to be his daughter. Since he became Sheriff, he’d done his best to maintain proper manners when it came to his personal life. Val was about to make him forget every promise he ever made to himself. “Val,” he whispered, “I need you to talk to me.”

Val laughed and slid her hand down the front center of John’s pants and gave him a knowing squeeze. “I need you, too, sheriff.”

John sucked in his breath, filled with eager anticipation of her touch and scent. He knew better than to get involved with a witness, especially Val. She had a sexy way of batting her eyes to try and get him to change the subject, forget the fact of her lying. “Stop, Val. No more until you talk to me.” John released her and stepped away until the space between them was wide enough he could breathe freely again.

“What are you talking about? I don’t know a thing about anyone named Steven.” The expression on her face said something entirely different.

John knew better than to push it. He needed her to trust him. “You sure about that?”

She winked and walked up to him again, tried to reach her arms around him. “You know I’d have no reason to keep anything from you now, don’t you, sheriff?”

John pressed against her, his hands wandered all over her body. He squeezed her bottom. “Is this what you want, Val?”