For most of us life is journey sometimes interrupted by subtle bumps and jolts. In Kevin Donnelly’s case, life was a rollercoaster ride to hell. 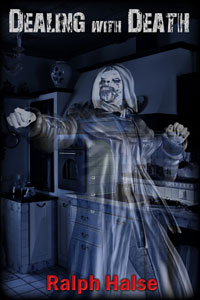 “Kevin, calm yourself. I’m simply attempting to clarify the status of your future,” Azra responded softly as he warmed his hands around the coffee cup. “My dear fellow, you’ve become over wrought. Please, set your mind at ease and see that your family is safe. Then we’ll continue our conversation.” Azra’s eye’s hardened and his voice firmed, “But I warn you, my old champion, steel yourself for what follows.”

Fear and adrenaline coursed through Kevin’s system. His vision blurred with dread, but he reacted instinctively. “I knew it,” snarled Kevin, snatching up the baseball bat. “You move an inch, sport, and I’ll cave your head in,” Kevin threatened with a confident flourish of the bat he hadn’t employed since his latter high school days. Backing out of the kitchen, Kevin rushed to Adam’s room, Dale’s was across the hall. He peeked in. Both boys were blissfully asleep. Turning on the hall light, Kevin looked in on Mary. Such was his shock that he uttered an oath out aloud. Staggering backward, he nearly dropped the bat. Laying in bed next to Mary was himself, asleep, flat on his back, snoring softly at the ceiling.

“Told you so,” a soft voice murmured at his shoulder.

“Best I take that before you hurt somebody, there’s a good fellow,” said Azra sympathetically, prying the bat gently from Kevin’s stiff fingers. Placing a friendly hand on his shoulder, Azra steered Kevin into the kitchen, “Told you to gird your loins, old man. Not quite what you’d expected though, but there you go. Some chaps simply refuse to listen.”

Guiding a stunned Kevin to a chair, Azra remarked pleasantly, “I say, for a colonial, you have made a marvellous purchase in that Britannica collection.” He indicated with a nod to the bookcase in the living room before propping the bat under the table.

Azra cocked an eyebrow. “A gift from the gang in the old HR department given when the announcement came through that you had been promoted to the junior executive. Your colleagues secretly chipped in a couple of dollars each month until they’d saved enough to buy the expensive, imported set. Your impending promotion to team leader was the most poorly kept secret at Bensons. But as far as secrets went, you carried two with you that day as you strode confidently from the executive chambers. You earned your promotion by surreptitiously devising a complex plan to sack all the HR staff but for four key players.

“You outlined to those eager executives how you could rehire a target group at ten percent less than their original wage, double their workloads while increase outputs. Oh yes, Kevin, you had done your homework very well. All married personnel and experts in their fields. You knew each could not afford a future without a steady income. Night after night, you carefully backgrounded your targets. You selected four HR employees not for any expertise they might possess but solely because they were over committed financially, school fees, car payments, and mortgages, loans, insurances, and sick relatives to support. Yes, old chap, you chose well. No sooner had you made your thankyou speech than you called this gang of four into your office and laid down the law. Wiped the fatuitous grins off their silly faces in less than two minutes you did, remember how good that felt? That was your first real taste of power and how you wallowed in it, like the proverbial pig. Ah, but now we come to your crowning moment of achievement at Bensons.

“You sat yourself at that microphone and in your best deadpan voice, you ordered Billy in to your office over the public address system. Leaving the microphone on, so that everyone could hear, you gave Billy the bad news in the harshest possible terms you could muster into your voice. Bravo! From that moment on, no more would you be regarded as good old Kevy the studious bookworm. No, those listening to you sack Billy would be addressing you as Mr. Donnelly, sir or just plain boss and thank you very much for the privilege. The rest is history. The remaining HR personnel were gone before five and good, old bookish Kevy was on his way up the corporate ladder.

“Now, may I suggest that you toddle over there, brush the dust off and make use of them. Be a good chap and look up Thanatos. Nothing like a bit of research to steady the nerves and take one’s mind off troubling moments,” he instructed lightly in clipped British tones.

Like an automaton, Kevin tottered over to the bulging bookcase. He sank to his knees on the thick Persian carpet. Numb fingers searched blindly through the collection until he located the appropriate reference. Flipping the pages, he read. As he scanned, his eyes protruded even further. Trembling hands replaced the volume. He knelt there, dazed, his knuckles pressed into the carpet, staring dolefully at Azra.

“I say, do take a seat, old man. A bit much to take in all at once, what?” Azra insisted soothingly.

Kevin shambled back to his seat. He literally fell into the chair like a bag of loose bones. He sat there staring at Azra’s smiling face until he plucked up the courage and spoke in a voice cracked by fear. Pointing down the hallway, to where his sleeping form lay, he blurted out, “Am I… Y-y, you, you’re Death.”