Mikial drags her reluctant people toward a tumultuous future where they can stand against human incursion as a united race. She learns that the true cost of leadership is paid in fraying friendships and strained alliances. It is the best time to discover love in another’s arms. It is the worst time for humans to return to her world. 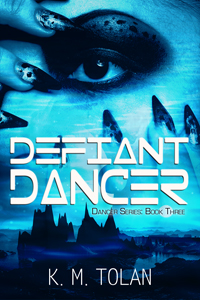 A streamlined silver ball darted through the drifting smoke near the island, its stubby wings glowing a bright blue as the machine sped unerringly toward her. She dove into the roiled murk below, her escort speeding ahead of her. They twisted around and shot back up again, their pale bodies appearing as if wrapped in clear jelly.

Mikial jetted to the surface with them, watching as each Ipper released a solid-looking bolt of water at the onrushing ball. One of the projectiles struck the flyer with such force that it sheared off a wing and sent the machine tumbling into the mud flat like a small meteor.

Mikial exchanged fierce grins with her escorts and surged again toward the pier. Datha covered her approach with raised weapons.

Rensa ran up and smothered her in warm towels. Teeth chattering, Mikial paused to watch the downed human machine struggle in vain against a sucking black demise. Thick mud overcame the flyer’s attempts to extricate itself.

Yora aimed her rifle at the machine, but Mikial put her hand on the barrel and shook her head. “Let the swamp have it.”