Demon with a Comb-Over

Laugh till it hurts!

There are few things in life worse than being a bombing comedian in an empty club, unless you pick on the one person in the crowd who happens to be an ancient demon who can make your life a living, ironic hell.

Stand-up comedian Charlie Broadmoor has a hell of a time coming up with new material while terrorized at every waking moment by a poorly-coiffed, thin-skinned eldritch evil whose appreciation of humor is dwarfed by his monumental pettiness. Charlie quickly learns that making light of the supernatural is no joke. It’s Seinfeld meets Milton in this uproarious tale of fear and laughing by Stuart R. West.

This edition also features The Book of Kobal, giving the reader a glimpse into the origins of the short-tempered demon. 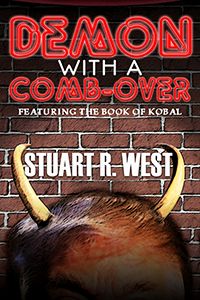 Demon with a Comb-Over

Down I plunged through the giant intestine, forced into hell’s bowels.

To my right, three men in business suits stood on an outcrop of fleshy stone. They walked in a circle, a finger curled around the man’s belt loop in front of him. Brandishing knives, they chopped them into each other’s backs, repeating the process in an endless loop of hellish frustration.

On the other side of the skeletal elevator, stood a headless, naked elderly man. His body hair had been burned off, his wrinkles creased with soot. As if noticing me (although I thought it unlikely given his headless condition), he snapped to attention. He bent over, splaying his ass cheeks. A head popped out between his cheeks, a wretched reverse birth. Opening his dull eyes, he blinked away excrement, and yelled, “You damn kids get outta’ my yard!”

And the escalator ratcheted down, Satan’s roller coaster clicking and clacking me into hell.

I saw things I wished I could unsee. Men were sodomized by what I presumed to be demons, although I averted my eyes whenever one of them materialized. A masked demon with glowing eyes operated on a crying woman, carving her face, chipping away her teeth, replacing the removed flesh with what looked like lizard skin. A fat man sat in a chair, a bib tied beneath his set of chins. Using a funnel, a demon poured a gloppy substance into him until his belly exploded, his rib cage opening like gates. Occasionally faces burst through the undulating walls, crying, shrieking gibberish.