Keith Evans and Tyler Sinclair are near twins in near identical situations. They both are young, handsome blond surfers finding themselves set down on the remote American-territory island of Guam and on their own. They both are fine with and good with sex with men and are keeping their lives together by being lower-price rent-boys in the Tumon area of the island for sailors coming off the naval ships on shore leave.

Will their “different stroke” decisions have very different results? 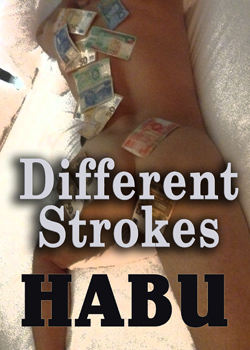 So, three days later—three delightful days of surfing and painting, one of the paintings coming out to be a nude of my vision of Dr. Paul Prentice—I was at Houser’s multimillion dollar house hanging out over the ocean on a cliff north of Tumon and modeling tuxes, suits, casual wear, beach wear, and, last, micro thongs best suited for the bedrooms of a bordello. There were four of us who were walking the runway—two smaller guys, including me, and two muscled-up hunks. The other smaller guy, Tyler, was a near duplicate of me—small, blond, willowy, androgynous, slim hipped, and sexy, if I do say so myself.

He was not for me, of course, as it was obvious we swung the same way. I’d seen him at the beach before, riding a board, same as me. I had been told the four of us would pair up for the porno films later in the day. I eyed the two muscular guys, trying to figure out which one would be mine. They were both body and face beautiful. One looked more dangerous than the other, though. It could have been because he was part Chinese and had a colorful dragon-scene tattoo that covered his left breast, around to his shoulder blade, and down his left arm to his elbow.

The catwalk was out on the wide, deep deck hanging out over the cliff head. The walkway came out of a bedroom at one end of the house—where we changed—and went around in front of the living room, dining room, and kitchen, and entered into a den, from whence we ran back across the interior of the house to the bedroom to change for the next pass.

The buyers, having been fed lunch, came out onto the deck and sat in chairs strung down between the cat walk and the railing overlooking the ocean. Dr. Prentice was there. That threw me for a loop when I first came out, in a tuxedo, and passed by him on the catwalk. But then, while I changed for the suit walk, I reasoned that that made sense. I figured he was gay. I’d seen him at Denial, and we’d shared gazes of unmistakable interest. The interest was there in his eyes at the clinic three days previously as well. And he was a doctor and was known to support charities. This was a charity event for a clinic. It aroused me to see him there, in the audience, but I had a job to do, money to earn, and I settled down to trying to do the modeling as professionally as the others did.