At first, Nick Morrison and Trevor Devane believe that solving a thirty-year-old mystery should be easy; even for two twelve-year-old boys.

Using Nick's psychic visions of the crime, they decide to piece together enough clues to identify the killer and capture the $10,000 reward. It soon becomes apparent that the boys are digging up bones that others would prefer remain buried. The harassment begins slowly with members of the local police force and quickly escalates into a serious threat to the young boys' investigation...and their lives!

As the boys dodge their pursuers and continue to gather clues, they begin to realize that the mystery may go much deeper than just the local police force. It appears there are even more powerful people trying to keep the past right where it is...buried and forgotten. 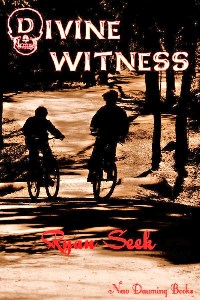 The whole time I was reading Divine Witness I felt a familiarity with the writing style. Upon further examination I decided that our book has a similar writing style with J.K. Rowling. My wife, who is a Harry Potter fanatic agreed. There's nothing pretentious in the writing style, like say Dean Koontz, who's always trying to show you how smart he is and constantly going off on tangents and loosing the reader(though I like Koontz, I'm agonizing through one of his books right now).

Why I feel a similarity with Rowling's writing I'm not sure. Perhaps it's because the book moved right along, resisting the urge to get lost in details or maybe because it's written for the average person and with a paucity of four and five syllable words but most likely it's because the book seems to be directed toward a young audience.

No, Ryan Seek's book is for people, not readers. He brings Nick and Trevor, along with Wendy, to life and gives them substance. Nick's Donna Reed style homemaker mother and Trevors' tough no nonsense father also are likeable characters. Likewise it's hard not to despise the somewhat inept, dimwitted but thoroughly nasty antagonist, Deputy Dwight. I can picture a thirteen year old, with one caveat, (There is some playful bantering and other profanities) or a seventy year old or anyone in between reading and enjoying this book.

"Probably just an old box of clothes," Trevor replied, bending down. He began pulling at the fabric, breaking loose bits of soil. He stretched the cloth straight into a shape that was unmistakably a girl's blouse with lacing on the front. From the fabric something dropped and hit the ground with a muffled clink.

"What was that?" Nick asked.

Trevor reached out and picked up the object, brushing at the clinging mud. He turned it around in his fingers. "Looks like a bracelet. Let's go wash it off in that puddle back there."

Moments later Nick watched on as Trevor shook the bracelet in a few inches of standing water. He wiped it off on his already soiled shirt and held it up in the sunlight. A metal plaque at the center of the jeweled loop glistened with the reflection. On either side of the plaque were various small turquoise, ruby and agate stones held together by a flexible, twisted gold band.

Trevor nodded. He was staring at the nameplate on the bracelet when his eyes suddenly widened. Watching him, Nick thought he saw a light bulb go on above his buddy's head. "Uh-oh," Nick said.

"Dude! I can give this to Wendy Burkhalter! I wanna get into her pants so bad."

"Buddy, she's so far out of your league it's not funny."

"Hey, you never know. With a beautiful bracelet like this, maybe I could win her heart!"

"Well, I guess you could give it a shot. But even if you do win her heart, I wouldn't advise getting in her pants just yet."

"You wouldn't know what to do with what you found in there!" Nick razzed him.

"Remember? Out in my dad's shed?" Trevor grinned like a fool, his eyebrows dancing up and down on his forehead.

Nick chuckled at the memory.

It had been last summer. Trevor's dad had set the boys to work on the lawn and trimming some of the bushes in their yard for extra money. While searching for the hedge clippers, Trevor had made a surprising discovery at the back of his father's tool shed; a hefty stack of magazines called Juggs, Oui, and Hustler. The boys had looked at each other like they had just discovered gold. They had grabbed a few of them and made a mad dash for Willowbury Woods where they would be less likely to be caught. As they oohed and awed over the photos in the magazines, they received an education that a boy just couldn't get in grade school. In full graphic detail! Although they were far too young to get the same kind of stimulation they would in a couple more years, those magazines had gone further in satisfying their curiosity than they could have ever imagined.

An hour later, they returned to Trevor's house and replaced the magazines just as Mr. Devane had come storming out the back door demanding to know why the lawn hadn't been cut yet. They had lost a dollar each over that little escapade. Trevor's father refused to pay them the full five dollars after running off to play for an hour before the work was done. Still, it was well worth that dollar in both boys' opinions. That was the day they both became men-in their eyes anyway.

"Too bad Dad caught Todd looking at them right after that," Trevor said, dejected.

"That's what you get for telling your dopey big brother about them," Nick scolded. Trevor nodded agreement. "Hey, let's see what else is in the box!"

Trevor quickly brightened up. "Yeah! Maybe we'll find some bras and panties too!"

"You are one sick puppy, Devane," Nick said.

Trevor stuffed the Wendy bracelet deep into the front pocket of his jeans and picked up the girl's shirt the bracelet had fallen out of. "You wanna keep the shirt?" Trevor asked.

"Why would I want that dirty old girl's shirt?"

Nick playfully punched his buddy in the shoulder.

"Ouch. You broke my arm!" Trevor complained in mock pain.

"Shut up, Devane. This time you give me a boost."

Trevor got into position on the steep bank and helped lift Nick up. Being two inches taller and a little bit stronger, Trevor was able to lift his buddy up several inches further than he had been able to get in their last attempt. Nick's head was above the level of the opening to the crate, allowing him to see much of its contents-which was mostly dried mud. Poking through, he saw remnants of more material, something plaid and a sheath of denim that might have been from a pair of pants.

"What've you got?" Trevor called out below.

"All I see is mud and clothes, Trev. I think you were right. This is just an old clothes chest."

"Well, dig around if you can. We found the bracelet didn't we?"

"Yeah. I'm going in as far as I can." Nick hooked his arms around the edge of the crate, the ragged edges of wood cutting into his pits. "Ouch," he commented as splinters threatened to tear into his flesh. With both arms he fished around inside the crate, pulling the cloth loose from its mooring in the drying river bed soil. Below the plaid material, he spotted something glittering in the afternoon sun.

"Trev! I think there is gold in here! I can see a gold nugget!"

"See, I told you there was something more than clothes in there! Pull it out!"

Nick stretched his arm as far as it would go, his fingers stopping just a few inches short of their prize. "I can't reach! Boost me higher!"

Trevor strained to lift Nick another couple of inches, breath hissing through his gritted teeth. Nick re-situated himself atop the crate's edge and reached again for the gold nugget. He felt his finger brush the little glimmer of gold and slide away. Again he adjusted his position and made another attempt. The old wooden box groaned with the pressure of his weight, and slowly began tipping out of the thick soil.

"Ack, the crate's coming loose!" Nick yelled to Trevor, but it was too late. The river bank lost its hold on the crate as it tore loose from its dock and toppled over. It fell, crashing to the riverbed, taking Nick and Trevor with it. Being at the bottom, Trevor was able to jump and tumble on the ground below. As he rolled to a stop he heard the crate hit the ground with a crack, the rotting boards snapping with the impact. Then the thud of his best friend's body as it found the earth from nearly ten feet in the air.

Trevor looked up to see that Nick landed just a few feet away, lying on his side. His face had turned some shade between crimson and purple. His mouth was agape, his eyes wide. Trevor could hear the slow scratching sound of Nick's lungs trying to draw a breath from the air around him. He bounded to his friend's side, placing a hand gently on his upturned shoulder.

Nick gasped again at the air, this time sucking a little bit in. The next time, he got a little more. Slowly his breathing accelerated until he was actually heaving in the cool spring air. What little natural color he had in his face slowly began to return. Trevor watched the transformation in awe.

"Buddy, I thought I lost you there."

Nick offered a wane smile. "Nope. Not. Me," he managed between gasps. "Tougher... than the shoe...leather. On... Old Lady Crandall's… face."

Trevor helped Nick sit up as his lungs eventually replenished the lost oxygen. Nick moved his arms and his legs, again grateful that he had landed on soft dirt and not stone. His shouldrer and ribs were a little sore, but other than that he had survived the second tumble of the day with little injury. "Now I know what Troy Aikman must have felt like," he said.

"Well, if your Cowboys knew how to make a good offensive line, the poor guy wouldn't have had to retire!"

Trevor reached down and grasped his buddy's hand. He began pulling Nick to his feet when he suddenly stopped. Nick saw Trevor's eyes widen as they stared directly over his shoulder.

"What's wrong-oof!" Nick sat back down in the dirt hard as Trevor's hand lost its grip with his own. "Thanks a lot," he was about to say before Trevor interrupted him.

Nick spun his head around to see what had brought such shock to his friend's face. Although his breathing had almost returned to normal, Nick's lungs suddenly found themselves struggling for air once again. He couldn't believe his eyes. The fallen crate had dumped its contents in a stream of litter across the river bed floor. In that litter of mud and tattered fabric were various curves and cylinders of bone poking out from the debris.

And, at the head of the stream, was one grinning, human skull staring back at them.

A Perfect Fit for Three (MFM)
Sydney Holiday
In Shelf
$1.99
Tweets by
sirenbookstrand