Doomed Grooms: Gay and Bisexual Husbands in Straight Marriages is a self-help book for both women who discover or suspect that their husbands are gay/bisexual and for those men who are ready to come out to their wives. Written by counselor Bonnie Kaye, M.Ed., the international expert in the field of straight/gay marriages, this book is a follow-up to her first book, The Gay Husband Checklist for Women Who Wonder.
Topics covered include the loss of women’s self and sexual esteem, the effect of the Internet in luring men into the world of homosexuality, the controversy of changing a gay/bisexual husband’s sexuality, the mourning stages after a marriage is over, and a list of steps to show women how they can start their journeys to Gay Husband Recovery. Doomed Grooms also contains interviews with past members of Kaye’s online support group from different parts of the world, as well as interviews with two gay ex-husbands who explain the dynamics of these marriages. She also shares heartfelt letters from both straight wives and gay husbands to show the emotional impact on both ends.
It is estimated that over 4 million women in the United States alone are or have been married to men who are gay/bisexual. Doomed Grooms allows women to come to a sense of closure by helping them understand the different aspects of homosexuality their husbands display. It also helps give validation to the millions who will never get the truth from their husbands in order to help them move on and heal.

About the Author:
Bonnie Kaye is an internationally recognized relationship counselor/author in the field of straight/gay marriages. She has provided relationship counseling and advice for nearly 30 years to more than 75,000 women who have sexually dysfunctional husbands due to homosexuality, bisexuality, or sexual addictions. She is considered an authority in this field by other professionals and the media. Kaye has published seven books on straight/gay relationships, which have sold thousands of copies. Her website www.Gayhusbands.com has consistently remained in the number one position on Google, Yahoo, and other major search engines since its launching in the year 2000. When media contacts want an expert, they go to Bonnie Kaye who has more experience and expertise than any other person in the United States. Her official book website is located at www.BonnieKayeBooks.com. Kaye’s support network has over 7,000 women around the world who receive her free monthly newsletter. She also has online computer support chat as well as a weekly internet radio show on Sundays, Straight Wives Talk Show on www.Blogtalkradio.com that can be accessed 24/7 around the world via the computer.
Kaye’s other books include: The Gay Husband Checklist for Women Who Wonder; Straight Wives: Shattered Lives (Volumes 1 and 2); Manreaders: A Woman's Guide to Dysfunctional Men; Bonnie Kaye’s Straight Talk; How I Made My Husband Gay: Myths About Straight Wives; and Over the Cliff: Gay Husbands in Straight Marriages. 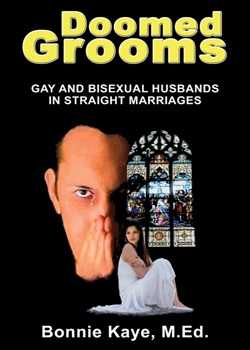