A disembodied voice has Keely Morgan feeling like her sanity is slipping away. Xavier Blake is assaulted with images of black dragons and painful destruction; flashes that seem almost like memories. Then when Keely walks into the bar and heads straight for his table, he suddenly feels complete, even though he’s never seen her before.

When a madman attacks Keely, Xavier somehow senses her fear and saves her. Strange forces push them closer together and take them from the world they know to a place where magic exists, unicorns dance and dragons fly. Destiny foretells they will unite and after a hard battle, will reign as King and Queen of Grogan.

But can they overcome the evil that plots to destroy them first? 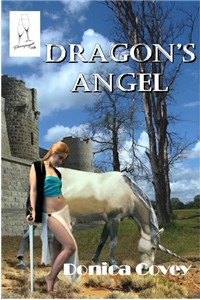 “Help me.” A cry broke through his skull.

“Keely!” She was in trouble, hurt and terrified. He turned in the direction of her fear and rushed headlong. As he ran, a change took over his body. It felt longer, lighter and stronger. He looked down to find the ground many feet below him. From his back, large wings pumped the air and he rose up and up. He was suddenly soaring high above the tops of the trees. His vision had altered. He saw in the colors of thermal imaging. There were dark blues and purples of the roots of trees and the stream that wound its way between the giants. He scanned the ground while his senses were focused on Keely. Her scent trail was stronger in his new dragon form than it had been before. The mental connection was also stronger. He followed the pull drawing him closer to her.

Her screams grew louder, her agonizing pain nearly ripping him apart. He landed and scanned the area for her. Her shape was red and yellow with exertion as she struggled to break free. The tree was wrapping its bark and branches around her, constricting tighter with each breath.

Once more he stood on two legs in his human form. When he lifted his hands, fire shot from his fingertips, engulfing the tree and filling the air with a putrid odor of burning flesh. “Keely!” he screamed and ripped through the burning branches.

She was slumped against the trunk, sweat streamed in tracks down her soot-covered face.