A bizarre red fog belches from the New York City sewers. Ian, like so many others, succumbs to its paranormal caress. As he lies in the street unable to move, all he can think about is Skorpe, the man who crushed his heart and stole his money. Soon, creatures composed of no more than glowing outlines with eyes like flaming coals begin wandering the streets.

Falling for Ian wasn’t in Skorpe’s plans. To save Ian from the Crimson Bane, Skorpe steals nine grand from him and leaves him to set up a safe haven then returns only to discover that he might be too late.

Struggling to comprehend a world turned upside down, Ian wants only to be with his partner Skorpe at The Castle, an underground stronghold for Parallelans and Earthies. However, Ian’s unpredictable ex-fiancé, Regina, is the residing MD, and Skorpe worries that Ian still has lingering feelings for her. When explosions at the Standoff Point separate Ian and Skorpe, the two lovers vow to find each another a second time, but there’s only one problem. Regina is determined to mend fences and make Ian hers again.

Stuck in the Appalachians, Ian begins a long trek back to the man he loves. However, Skorpe has a problem, too—a very handsome one. Can Ian and Skorpe’s love survive distance, temptation and demons swarming the countryside? 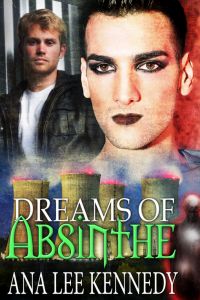 “What about the truck and its supplies?” Ian asked.

“We’ll come back later to recover it if survivors don’t scavenge it first,” the man said, motioning for them to get in a tank. He smiled, his lips as black as Skorpe’s. “Let’s go. The military tank is cramped, but it’s safe.”

“Works for me.” Ian jumped up on the tracks and climbed to the top of the metal beast.

Behind him, the man laughed, and so did Skorpe.

Ian turned and looked down at them. “I don’t want to be here if those things come back.”

Another Parallelan gazed up at him from the open hatch. He motioned for Ian to climb inside.

“I just want to get settled someplace where I can relax for a while,” Ian said to Skorpe. “My nerves are shot, I’m starved, and some good absinthe sounds like Heaven right now.” He raised a fist in the air. “Remember—absinthe forever!”

“I hear you on that,” the big Parallelan agreed, laughing.

Something poked Ian in a pec muscle. Remembering the crushed DVD, he removed it from his inner pocket and tossed it.

“What was that?” Skorpe asked.

Everyone burst into a riot of laughter.

Ian held his hand out and, with a wry smile, Skorpe gripped it and climbed up after him. Climbing down the ladder into the tank, Ian looked forward to reaching The Castle. It was time to start his life with Skorpe, and with any luck, their two worlds would discover a way to defeat the Crimson Bane.