Neil and his family are on their way to spend the Christmas holidays on the mid-north-coast of New South Wales, several hours north of Sydney. But when they stop at a driver reviver station Neil takes the opportunity to prove that an urban gay myth is just that—a myth.

Unexpectedly Neil finds that some gay myths are actually true, and the discovery he makes that day is to change his life. 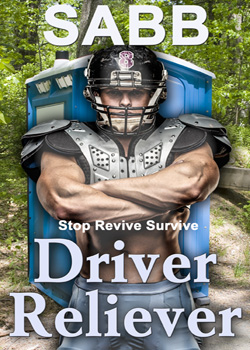 In the driver reliever station jungle, we were making so much noise that we were attracting the young, virile, nearby tribesmen. And, just as they had been in my fantasies, they were here in the jungle, hidden, but touching themselves and each other as they watched Tarzan plowing me. And then, with his permission . . . .

My second visit to the driver reliever center at the wayside driver reviver stop was going even better than my first. All tension from the long drive on the busy highway had flowed out of me, and when I was finally released, I knew I was ready to face the traffic once more.

I had heard, several times, the one about the hunks waiting inside what looked like an ordinary portable toilet, at the driver reviver station at the end of the freeway coming from Sydney. In your dreams, I thought. And I laughed each time. But ever since Hank told us about being there and seeing it, I had thought about it.

Hank has no imagination. Hank couldn’t dream up a decent sexual fantasy if his life depended on it, let alone a gay one. Hank has never made any sign he might even fancy that sort of release. But Hank is also boringly honest. Which is actually one reason I like him. You can rely on Hank. If he says he will come over and help you build a new fence at the side of your house, well, he does.

The Legend of Holleystone Grange (MM)
Sabb
In Shelf
$3.99
Tweets by
sirenbookstrand