Ecstasy and Distress is a historical family saga and romance that spans several generations. The story unfolds as a Jewish immigrant family settles in the busy and growing city of Portland, Maine, in 1840. Here they find many hardships as they confront anti-Semitism, nativism, and adjustment difficulties as they gain acceptance as peddlers and shopkeepers. At that time Jewish men becoming physicians and lawyers parallels the women who faced the same derision in order to become doctors and lawyers as well.
The novel thus tells of Jewish marriages and intermarriages that continue to build the family tree. These characters are strong self-assured women and men who reject family dismay as they find love, joy and gain acceptance in their struggle for dignity and honor not only in their chosen professions but within the various families.

Praise received:
"Richard Shain Cohen's fifth novel, Ecstasy and Distress, stops at all the junctures in this long and winding road detailing the arrival of a European Jewish family, the Blumenthals, in Portland, Maine, in 1840. He artfully details the progression of six generations of its members through the ensuing decades culminating in the Second World War. We come to learn that in spite of a common denominator of trials and tribulations each family's narrative is trenchantly unique. What was it like to be Jewish in pre-Civil War America? Was upward mobility possible for such as these? Was the American dream a fabrication, or were there new pathways to social and economic mobility in this rugged and changeable milieu? The ever-present specter of discrimination had to be faced, dealt with, and history had to be encountered on its own terms in the swift-moving currents of a family's long and courageous journey. The author does a superb job of bringing the Blumenthals into modern focus as a living, breathing, loving, caring entity and a strong and determined family capable of plotting its course and absorbing life's blows while redefining its terms for those to follow."
- James T. Kenny, PhD, Author

About the Author:
Richard Shain Cohen of Cape Elizabeth, Maine, is originally from Boston. He retired from the University of Maine at Presque Isle after serving as Vice President of Academic Affairs and Professor of English. He holds B.S., M.A., and Ph.D. degrees. Richard served in the military and is a U.S. Army veteran.
His own publications include: Fiction-Ecstasy and Distress; Our Seas of and Love; Monday: End of the Week; Be Still, My Soul; and Petal on a Black Bough. Non-fiction-Healing After Dark: Pioneering Compassionate Medicine at the Boston Evening Clinic; The Forgotten Longfellow: Man in the Shadows; Poetry-Only God Can Make a Tree. He also wrote chapters for Aroostook: Land of Promise; academic reviews and articles, and – with the aid of a Shell Grant – a monograph on Samuel Richardson that can be found in major library holdings.
He served as editor of the journal Husson Review and was principal participant in a National Endowment for the Arts Grant for "Images of Aroostook" that was exhibited throughout the State of Maine. 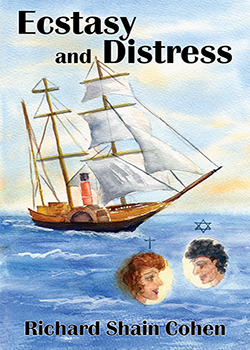