Emma looks down at the crowd from a hanging platform.

Her father was framed, and she took the blame for the crime to save him from execution. Where is her beloved husband, Nate?  She looks around and sees her husband on a horse, guns blazing. In a whirlwind rescue, she hops on the back of his horse, and they're off, realizing that they will spend the rest of their lives as outlaws.

They capture a wanted man and leave him at the doorstep of the sheriff's office. The sheriff finds Emma and Nate and makes an interesting deal with them: they will capture the bad guys behind the scenes and allow him to take all the creditthis in turn for not being run in. For this couple, ahead lies a life of excitement and passionate love. 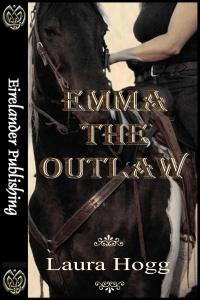 Emma dabbed at her forehead with a dainty handkerchief. "Pa, do you reckon we'll be home before sun-up?"

Emma's father, Old Jackson to most, nodded and snapped the reins. A flourish of dust whirled around them.

"We otta refresh ourselves there, at The Dry Bucket. It will be another three hours before we reach home."

Emma looked ahead a few yards at the lumpy dirt street that loomed before her. Perhaps wide enough to allow four or five horse-drawn carriages room enough to amble side-by side, Main Street here in the fine mining town of Leadville welcomed people with businesses lining both sides. They turned onto the road, passed a lodging and laundry house and took it slow now. A bearded man leaned against a post under the awning of a mining supply store. He stared at them, his brow furrowed. A cloud of cigar smoke surrounded him.

Next to an upcoming hotel, a six-horse stagecoach pulled up to a liquor emporium. Four bedraggled men crawled out and slipped past the bat-wing doors of the saloon. Emma's father parked right beside the stage, hopped down, and offered his hand. She picked up her skirts and allowed him to help her down. Her feet hit the dusty road with a thump, and a puff of dust covered her little boots.

They approached the entrance. Pa held up his hand. "Wait, darlin'. It most probably will not be a proper place for a lady. I'll order us some drinks and bring them outside."

"Pa, really, you're my chaperone."

"I insist," he said with a stern brow, but yet a smile.

He tapped her shoulder and pushed through the swinging doors. Emma watched him, peering over the doors. He walked over to the bar.

A bushy-bearded man greeted him. "Whatta you have?"

Emma turned her attention away and glanced over the dim room. A nearly naked lady sat on a gambler's lap. Emma tore her gaze from the hurdy-gurdy girl. The stench of unwashed bodies mingled with whiskey imbued the saloon. Emma sniffed and coughed and dabbed at her cheeks with her damp handkerchief.

The sound of thundering horse's hooves split the air. Emma whipped around. A man approached as the lengthening shadows of dusk stretched over the land. There was something in front of hima man lying limp across the front of the horse.

The stranger almost collided with the post in front of The Dry Bucket as he came to a dramatic stop.

"This man's been shot!" he yelled before he jumped down from his mount. He lowered the unmoving man to the ground.

Emma ran up closer as the saloon emptied. Men brushed past her, shoving. She pushed ahead, looked down at the fallen man and gasped. A dirty, bloodstained rag circled the man's chest. Four men hauled him inside, promptly placing him on a table. Someone yanked a lamp from its position hanging on a wall and held it over the man.

"We need to remove the bullet. McKenzie's real bad," the stranger said, glancing at each of the patrons.

The bartender sighed and nodded. "I've done it once or twice. I'll give it a try." He tossed a look at a skinny adolescent boy with a rag in his hand. "Get me a knife, lad."

The boy nodded and ran behind the bar. McKenzie groaned. Emma looked at her father and parted her lips.

The young bar hand returned with a knife, and the barkeep took it.

The man holding the light did so. "Twenty dollars says he dies before sun-up," he said.

Emma put her fingertips to her lips then lowered them.

A cowboy spoke up. "I'll take that bet."

Before Emma knew it, several men went in on the bet. McKenzie's eyes fluttered open.

The bartender leaned in. "What's that?"

The light holder shifted the lamp a few inches to the left. Emma trembled under the yellow glow. Her pa wrapped his arm around her shoulders.

The bartender narrowed his brow. "What is it Mac?"

McKenzie looked at Emma's pa and snarled. "Shotme." His eyes closed, and his head rolled to the side.

Emma sucked in her breath. All eyes landed on them, and the heat of suspicious glares made her skin crawl. "It isn't true! We just arrived in town. We went shopping to get my ma a nice gift for their anniversary. Look in our carriage, and you'll find the new dress. Pa was with me every moment for the past week!"

Someone yanked her pa from her arms. "Fetch the sheriff!"