When Alyssa meets Damian and realizes he's vampire, she wants to put a stake through his heart. But after coming up against his supernatural strength, she finds herself with a new dilemma: how to resist the sexual tension between them . But she must remain strong. Vampires killed her family and she will not forget her vow to destroy them.

Damian was sent to kill Alyssa, but after a taste of the young woman he cannot bring himself to end her life. Instead he brings her under his protection, whether she's willing or not.

Sparks fly with not only the wicked slash of flying stakes, but with the heated passion the two try to deny. It's only a matter of time before the walls tumble down and Alyssa's faces the truth: not all vampires are evil. But can she put aside her hate and surrender to Damian, for all eternity? 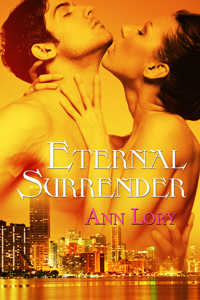 In a flash, she struck out with her weapon again, intent on ending his life, but he brought his hands up. Without touching her, he somehow sent her body hurtling through the air. She tried to scream, but the breath was knocked from her body when she crashed against a dumpster and fell hard to the ground. The stake slipped from her fingers and rolled away down the slight incline in the pavement. Groaning at the impacts from the dumpster and ground, Alyssa looked up to see the vampire approach her and rose warily to her feet.

Her eyes narrowed at the trickle of blood staining his black shirt; she snarled at him, pleased at the sight of the bubbling, searing wound she’d scored. “You bleed just as humans do. Vampire.” She couldn’t help but taunt him, feeling a victorious satisfaction, although her hands were now bare.

Touching his fingers to the wound, he looked at her, his eyes beginning to glow. She moved sideways along the wall while he smiled and brought the long digits to his lips, licking the dark liquid from their tips. She sneered in disgust.

“I imagine yours tastes much sweeter.” His voice was a seductive murmur, sending chills down her spine.

Enraged, Alyssa lunged toward him. Her fist shot into his jaw, whipping his head to the side. She lashed out her foot and hit his chest, slamming his body into the wall behind him. Before she could follow up on her surprising success and tear him to pieces, his hand snaked out, grabbed her wrist, twisted her body around, and yanked her to him. Her back was now pressed against his chest, his arms wrapped around her, binding her in the iron cage of his arms.

She fought his hold with everything she had, but he laughed. At that, Alyssa stopped struggling, held her head high. If this were to be it, she wouldn’t go down like a coward. Refused to. She’d make her family proud!

Lowering his head toward her, Damian whispered against her ear. “You’ve killed too many of D’Angel’s offspring, thus, you’ve ended your own life.” He held her tightly against him for a moment before continuing. “Did you not know when you began this murderous spree, you would die?” He kissed her earlobe, pulled it into his mouth with a slight suction. She trembled as waves of warmth rushed through her at the rasp of his breath, the deep baritone of his voice, and yet, chills raced up her spine at his softly spoken words. “How is it you found out about vampire kind? Watch too much Buffy and Angel?” His mouth moved below, and pure fire sizzled along her flesh as his tongue caressed its way to her rapidly beating pulse.

Alyssa was mortified that her body reacted this way, betraying her every instinct. Her mind screamed at him to stop, but she seemed to melt against his hard, sinewy length.

“Your death does not bring me joy, but I must do it just the same.”

Her eyes closed and she gave a small cry; her body jerked in his embrace as his fangs pierced her flesh. White heat seared her, then, shockingly, she surrendered to him, despite the warnings clamoring in the back of her head.

She moaned as pleasure swept her away, drowning her in waves of foreign sensations. His lips were unexpectedly gentle as they caressed and suckled at her flesh. Alyssa wanted him to take her, to give her what seemed just out of reach. The needy intensity grew in the pit of her stomach, and her breasts tingled as though they might burst into flames at any moment. Instead, the ache traveled south, settled between her legs, throbbing, begging for release.

It felt as if she’d been waiting her whole life for his touch.