Who can resist having sex when they shouldn’t?

Forbidden fruit tastes sweet, and Explicit Encounters meets those who aren’t afraid to reach out and take a bite. From affairs conducted behind a partner’s back to acting on deepest fantasies, these stories reveal what happens when illicit sex becomes too much to resist.

Good girls, bad boys and people who simply love to break the rules can all be found in Explicit Encounters. 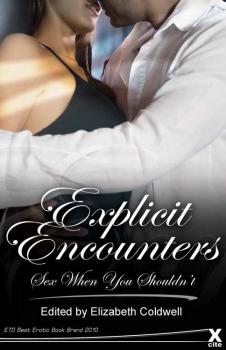 I got gingerly to my feet and leaned against a tree. Tex was murmuring into Mohawk’s ear and then he gently picked up the horse’s leg and examined the hoof. He put it down and gave the beast a reassuring stroke along the flank; I wished desperately that it was my rump he was stroking like that and I had to bite my lip to control my ragged breathing. My heart was thumping in my chest as he came back toward me. ‘Yup, he’s lame all right,’ said Tex. ‘You’ll have to come up on Jet with me. Mohawk won’t be able to carry your weight.’ He tied Mohawk’s reins to the back of Jet’s saddle so the lame horse could follow us home. Then he gave me a leg up on to his own horse with an easy grin. I felt his eyes raking down my body as I swung my leg over and wriggled forward on the saddle to make room. Seconds later he was sitting snugly behind me, with the reins in his left hand and his right hand resting on his hip. ‘Giddy up, Jet,’ he said and I felt his thighs tightening against the horse’s side. I sat bolt upright, hardly daring to breathe and certainly not relaxing into the rhythm of Jet’s stride. Although I was hardly touching him, I could feel the warm proximity of Tex’s skin, despite the cotton of our checked shirts and the narrow space between us. It was at least a two-hour ride back to the ranch and I was already starting to feel turned on. How the hell was I going to survive the trek without making my feelings obvious? But as I looked around, I realised we weren’t going back the way we’d come. ‘Where are we going?’ I asked, swivelling in the saddle to look up at his chiselled features. ‘Seeing as how old Mohawk is OK without a rider, I thought we’d carry on up to the Ridge,’ he said. ‘That OK with you?’ I swallowed. ‘Sure,’ I nodded, turning back to face forward. But as we rode on in silence, I was finding it harder and harder to concentrate on the scenery. My back started aching from sitting so rigidly straight and the low, rhythmic sound of Tex breathing so close to my ear was driving me wild. I wriggled to try and get comfortable and my shoulder blades brushed up against his chest. That one move lit the fuse and, defeated, I slumped back against him and gave in to what I now knew to be inevitable. ‘That’s better, honey,’ he whispered. And as he adjusted his position in the saddle I could feel the burgeoning bulge in his groin pressing up against the small of my back, while my mons was rubbing up against the pommel with each swaying step. My breathing became faster and, completely without volition, I knew my hips were grinding back and forth against his. His right hand snaked up my side and then popped open the front of my shirt. I wasn’t wearing a bra and Tex growled with pleasure as his hand encountered my nipples, already proud and erect as they became engorged with longing. He twisted and pulled them between his finger and thumb until I cried out with the exquisite pain, then he leaned me sideways so he could bend his head around to kiss them. A pulsating electric current ran from my breasts to the pleasure centre between my legs and I writhed against him, moaning uncontrollably as he flicked his tongue against my nipples and gently teased them with his teeth. As I begged for satisfaction, he dropped the reins across Jet’s neck and used his other hand to start undoing the buttons of my jeans. ‘Feels like you need this pretty bad,’ he said as he slid his hand down into my panties. I gasped. Within seconds his fingers had found my clit but then they searched further round, stretching deep into the warm, wet recess of my vagina. I quivered as his experienced hand explored and sought out my G-spot, applying gentle pressure with small circular movements. Then, with his thumb, he started to stimulate my clit at the same time. He had me slung across his lap and was literally playing me like an instrument – the sensations soared through me like music, building in a spectacular crescendo as I responded to his skilful touch. As he worked his hand faster my pussy was awash with juices and flooded with pleasure. My back arched and my hips bucked as the orgasm ripped through me and I shuddered as he kept the waves crashing over me for what seemed like an eternity. It was like nothing I’d ever experienced with Kyle or with any other man. My soft moans had risen to cries of ecstasy and I was left panting and breathless. Holding me tight, he gently withdrew his fingers from my throbbing vagina and my body slumped against him like a limp rag. I was drenched with sweat and I could smell the earthy scent of my juices on his hand as he held my chin steady and bent to kiss me. His tongue forced my lips apart and explored my mouth hungrily, and without breaking away from me, he slipped gently off the now stationary horse and pulled me down into his arms. I kissed him back; the monumental orgasm had hardly dulled my hunger and I could feel through his bulging jeans that Tex needed the sort of satisfaction that only I could give. I rubbed my hand over his crotch, pressing hard, and he responded with a low, throaty growl.