Love is strange no matter how young or old you might be. Scientist dedicate years studying to see what draws together two humans that love one another. I was drawn into love by a pair of dark dangerous eyes.

It led me from my normal life with everyday work hours and normal friends into a wild chase across the county that was laced with both the scariest danger and the most outstanding love and sex I had never dreamed was possible.

What I never expected was how it would all end up, after everyone wanted me and I was not sure I wanted anything but my old life back. 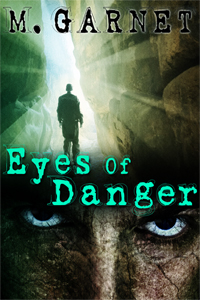 Now he began to walk over to me. I sat up a little straighter glancing towards the door, debating if I could make the distance. I remembered a couple of alleys with the bodies of men who were probably trained a lot better than I was. I sat and watched. He stopped in front of me.

“Then I went to Cincinnati to find and help a friend. I got one of those sixth sense warnings but it was from a very attractive woman, not some Columbian drug lord. Unfortunately, she drew the attention of the wrong people. I couldn’t help her and I couldn’t help my friend and here we are.” He was standing so close his legs were against my knees. I slid back on the bed leaned back on one arm looking up at him.

I drew in a breath. “And here we are? Exactly where does that leave us? Toledo wasn’t high on my tour list.” I was pleased that my voice sounded steady because my body wasn’t. My stomach was heating up. I could feel a strange feeling crawling up my back.

“Well, I thought we should follow up on that kiss at the seven-eleven.” He leaned down and I looked up in complete shock. I guess I was expecting anything but this. If he had drawn a gun, if he had threatened me, if he had told me he was turning me over to the CIA or the police or the military, or that F. J. Franklin guy I would have had the anger to fight.

But he lowered his head. I watched the dark eyes just came closer and I just sat frozen in shock. Then I felt his hand on the back of my head his lips did touch mine and I closed my eyes. I have had a lot of dates. I had two guys I had ho-hum sex with. I didn’t have an active life so I could count the guys I had kissed seriously on one hand. This wasn’t one of those types of kisses.

I just felt the soft touch at first but then there was a heat that built, there was the touch of his tongue on my lips. I surprised myself when I became aware that my mouth was opening with an invitation that welcomed the invasion. The warmth along with the sensation was moving down my body. My brain was shutting down as my body opened up.

I felt the bed behind me realizing that Tim had gotten us both down full length on the bed but he had not removed his mouth from mine. I didn’t want him to the intense feeling of the kiss was traveling through me. He finally raised his head moving his lips so softly over my damaged cheek. Then I felt the heat really turn on in my body. He went beyond my cheek to my ear. He found my neck then the pulse that I knew was beating fast and heavy with each breath I was taking. There was another pulse that I was feeling, it was in response to his hand which had found it’s way under my shirt and up over my bra, cupping one breast which was responding in a way that I had never had before.

“Tim.” I whispered because that was all that would come out. I tried to pull his head up but he burrowed further down into my collarbone. I gasped as he moved his hand down to the waist of my jeans. I felt him begin to unbutton the first metal clip so he could pull the zipper down.

“Tim.” I did get the name out louder this time and he rose up. By this time the heat in my stomach was actual pain.

“You don’t want this?” He asked me. There was a strange look in his eyes, those magical black eyes. “I feel a connection. I don’t feel I am reading you wrong.”

I wasn’t sure what I wanted. I didn’t know how to explain it. But I knew I had to do something soon about the pain in my stomach. “Tim, you scare me beyond words. I know you are a killer. But beyond that I will admit that I am drawn to you in a way I cannot explain.” He smiled listening to me as he reached for the buttons on my blouse.