Fairy on the Christmas Tree

Frances never uses her left hand for anything but brushing her hair. That changes when she breaks up with her lover on Christmas Eve and drops the phone in boiling custard. An equal opportunity elf restores her faith in life when he sells her a fairy doll for her Christmas tree. 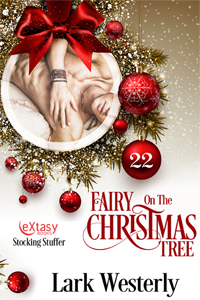 Fairy on the Christmas Tree

“Fran? Did you pay the balance on the cruise today?”

Frances considered Casey’s as the cordon bleu of voices. She had been seduced by that dark chocolate voice when they’d met at her office party back in June. Casey had been there as the guest of a guest and the words, ”Hello, Frances,” in that melted chocolate tone wooed her in an instant. Melted Belgian chocolate, she specified, pooling in her navel and running down her thighs in glorious glutinous rivulets made for the licking. Mmmm. Chocolate.

Frances tucked her head sideways to hold the phone so she could go on stirring the custard on the stove. Frances was so incurably right-handed she seldom used her left for anything except—oddly enough—brushing her hair which was long, luxuriant and red as a hearth-fire with licks of yellow and cream. Most people meeting Frances for the first time assumed it was a creative salon effect, but it wasn’t. It was simply Frances’s left-hand-brushed hair.

Apart from its hairbrush duties, her left hand was there, she considered, just to satisfy the curious requirement humans had for pairs. Pairs of eyes. Pairs of nostrils. Pairs of ears. Pairs of balls. Casey sported a prime pair of balls; velvety soft. Frances wished she could get a giant balls-shaped beanbag so she could snuggle on Casey-style balls when he wasn’t there.

“You’d better do it right now.”

“Right now I’m making dinner and I still have the Christmas tree to do.”

“My Christmas tree. It’s an heirloom. You’ll see tonight—in fact, I’ll need your help to screw the base together.” She put the faintest emphasis on the last verb, but Casey failed to pick up the thread.

“Don’t you want to go on this cruise?” The dark chocolate voice sounded reproachful. “If you don’t make that payment you’ll forfeit the deposit.”

“I know...” A luxury New Year’s Harbour Cruise with Casey was bound to be delicious, but living on pasta for most of December, making do with her old flip phone for another year and skimping on Christmas gifts for her family to afford her half of the costs was not. Since moving into her late and beloved grandmother’s terrace house in August to save on rent, Frances had found a new level of stress and expense. The utilities, rates and upkeep added up to alarm and despair. It was sweet of Grandma to leave her the house but the list of looming and necessary repairs resembled the national debt.

Frances found her left hand, the one unoccupied by the wooden spoon, clenching. “Casey… couldn’t you pay the balance?”

Casey sighed. “The booking is in your name, so you need to confirm it. I don’t know why you’re making such an issue of this. You know I’ll reimburse you for my half. I always pay my way.”

“Look, Fran. I’m stuck in traffic. I can’t make online payments right now. It wouldn’t be secure. It makes sense for you to make the full payment and for me to reimburse you before we leave.”

“But I’m stirring custard,” she said.

He laughed suddenly. His laugh was low, and Frances felt herself melting inside. “And custard is more important than a weekend cruise with me? Our first time away? Oh, Fran, what am I going to do with you?”

Frances licked her lips. “I have a few ideas. Hurry up and get here and I’ll put them to you. I’ll finish the custard and you can ladle it over my tits and suck it off. Mmmmmm.” Her bare toes curled.

“Hold that thought. What are you wearing?”

“My holly-print tee and a new holly comb in my hair.”

Frances grinned. “Nothing. Not a stitch. Not a thong, not a—”

“You mean if I flipped up that shirt…and knelt before you right now…I could lick your clit? What would happen then?”

“The custard would scorch and the pan would melt.”

“That wouldn’t be the only thing melting.”

Frances was practically melting right now. “Are you still stuck in traffic?”

“Have I enough time to shower before dinner and… dessert?” She lathered the word in innuendo.

Casey made no response. She hoped he was picturing the delicious things they could do with vanilla custard and whipped cream.

Frances lifted the wrist of her stirring hand to push back a lock of hair. A stream of yellow milk/egg mixture transferred itself to her tee, crawling from left tit to hem and meandering down her thigh.