This book picks up where Shockwave left off…

Jack and Kate struggle to navigate through the web of lies surrounding them. Chasing shadows, the truth is closer than they realize. Isolated and hiding from unknown forces, can they uncover the buried secrets that killed Mike and put a price of their heads? When Kate makes a deal and leaves Jack behind, will she make it back, or will one misstep destroy all of their hopes for the future? 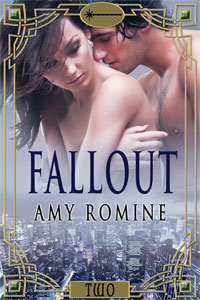 “Goddamn it, I should have seen it.”

“They already have the data. They always had. It explains the time lapse between the lab fire and Mike’s death. They had the data, but they can’t get to it.” She rose from the couch, her mind obviously working faster than she was able to express. “That’s why they killed Jacqui Busa, she created the key. They found out we were about to bring her into custody so they killed her. Lloyd Andrews must’ve figured out what was going on and sent the data to Mike. Mike hid the data, knowing that eventually those responsible would crawl from the woodwork.”

“Okay back up, explain what you are talking about.”

“The flash drive has what’s called a key on it. It is the key to unlocking an encryption code used in protecting a file. Namely the data file we thought they were looking for.”

“So all this time they weren’t after the file itself, but the key to open the file?”

“Yep,” she said, rubbing her neck.

“So is this good news or bad news?”

“I haven’t decided yet,” she said with a smirk. “The data was clearly defined, cut and dry. This is something different. There has to be something special the encryption is holding to make so many parties actively searching and or killing for it.”

“So what happens now?”

“We have to get the chip into the right hands before they find us, and hopefully put an end to all of this.”

“How do we do that exactly?”

“That, I have to think about.”

Jack moved to where she stood, brushing the hair off her shoulders. She looked to him, her eyes wide and intense. “What can I do?”

“I already trust you.”

“It’s going to be more than that. I need you to really trust that I am going to do what needs to be done.” Her hands rested on his chest. “Even if you’re not there.”

“You can’t come with me, Jack, it is too dangerous.”

“Wait, I thought you hadn’t even decided what to do yet?”

“I haven’t, but I already know you’re going to have to stay here.”

“I thought we were in this together?”

“Obviously not, Kate, you are willing to walk into this alone with no one to watch your back. Which to me sounds like a suicide mission and I’m not going to let that happen. No matter how much of your pride I have to fight.”

“This can’t be about you protecting me while I hide in the bathroom. We have to be in this together or this isn’t going to work.”

“Don’t you think I know that?”

“So, what then, you asked me to trust you, doesn’t it go both ways?”

“Of course it does.”

“Then why can’t you trust that I can handle this?”

She met his eyes and then turned away. “You staying here has nothing to do with me trusting you, or whether or not you can handle yourself, Jack.”

She continued to avoid his eyes, causing the frustration in his chest to build. “Stop pushing me away and just tell me the truth!”

He waited, preparing himself for the ugly truth of him being dead weight and a liability. He wasn’t an agent and this was too important to leave to inexperience. He waited to be patted on the head and told to wait, safe in the shadows until it’s over.

“I can’t…” Her face scrunched in frustration.

He held his breath.

“I can’t deal with the fear of something happening to you. Something I can’t stop.”

“Stop, Jack, please. I’m just not strong enough to be the federal agent who is protecting you as well as the girl who loves you. Out there, it has to be one or the other, because I can’t do both.”

“I’m sorry, Jack, I almost lost you once this week. Taking you with me is asking me to do something I just…can’t…I won’t do.”