Long time married, Dee and Kyle know how to keep the passion between them alive. Every so often, they have a fantasy night, and this time it’s a fantasy of Dee’s. She wants him to take control and she wants to obey his every command. Dee gets exactly what she desires and enjoys it very much.

At the Venus School for Young Ladies, girls are prepared for their future husbands. After being caught doing something she shouldn’t, Victoria is punished by the Principle, Madame Thackeray. She is assigned a task to perform correctly every night, or face the glorious punishment of Madame Thackeray again.

A man who travels around refilling vending machines unashamedly has numerous women to brighten up his dull job. Of course, he has a couple of favourites... When his two busty lovers meet up and conspire against his girl-hopping ways, he is in for a visual treat, as these well endowed ladies put on a marvellous show.

Phone on the Train by David Inverbrae

Any Friend of Hers by Jeremy Edwards

Dahlia is throwing a dinner party; some of her closest friends and her loving husband. She plans to take the girls shopping and before she leaves, she asks her husband a strange question; has he ever thought about sleeping with any of her friends? Uncomfortably, he admits he does. After the dinner party, Dahlia goes back to her theatrical roots and dresses up as her friends in an exciting role play with her husband. 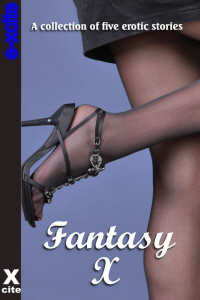 It was fantasy night. Dee could hardly breathe with anticipation as she waited for Kyle to come home. It was nearly a month since their last game, and this one had been spoken of a couple of weeks previously and never mentioned again. It felt more exciting that way, and Dee knew Kyle would remember the details she had whispered to him in the middle of that night, when she had spilled one of her deepest, most shocking, fantasies to him.
Kyle. Her heart thudded that little bit faster as she pictured her husband. He was so sensual, so powerfully sexual – and he saved it all for her. Other women noticed his good looks but they had no idea how hot he could be.
Dee grinned, remembering the overheard conversation earlier that day. She’d been at the photocopier when she heard voices outside the window; Julie and Carrie, having their usual sneaky fag.
“So, I saw Kyle again yesterday. I don’t think he knows the difference between a woman and one of his blessed computers, from the notice he took of me.” (Julie had slept with five of the male members of staff to Dee’s knowledge, though it might be more, and took lack of interest as a personal affront.)
“He wouldn’t, would he – he’s married to Dee!” Both women squealed with laughter. “So sweet,” Carrie continued maliciously; “they were school sweethearts, you know, before they both started working here. Probably virgins till the day they married.
“Probably virgins still,” said Julie. “Or do you think he has a timer on his home computer? ‘Beep beep,’ time to have sex now. ‘Beep, beep,’ time to finish.”
“D’you think it’s two minutes of missionary position every Friday night? Highlight of the week?”
“Or lowlight,” Julie rejoined.
Dee had listened to the conversation, greatly entertained. Probably, she should have been offended, but the two girls were so wide of the mark she had found it difficult to hold back her laughter. Did they know how bitter and jealous they sounded – without even knowing how much they had to be jealous about?!
He would be home soon. Dee checked her watch, then glanced in the mirror to ensure her hair and make-up looked right. For the nth time she smoothed a hand over her hair then sat down; stood up; sat down again. Hell, she was really nervous! She’d had this fantasy for so long, and even after they first began swapping stories and acting them out … well, she never imagined she’d be able to tell even him about this one. But she trusted him, and it was excitement as well as nerves that were making her shiver. Tonight – tonight, Kyle was going to take control. She would submit, obey his every word, willingly – wantonly – dominated by her man. She would be Kyle’s play-thing, his toy and have no mind of her own; she would be bent to Kyle’s will. Whatever Kyle asked. Whatever. She crossed her legs tightly, tingling with desire.
The key turned in the lock and Dee felt her heart rate spike.
“Kyle?”
“Mm-hmm.”
The sitting room door opened and Kyle walked in. Dee took a deep breath. Wow, he certainly knew how to dress the part. The tingling increased as she looked from the leather jacket to the sharp-cut jeans (lingering appreciatively at his crotch) and down to the polished boots. He looked at her in turn and lifted an eyebrow.
“Aren’t you supposed to stand up when I’m in the room, little submissive? I expect good manners in you. You surely don’t need to be punished for disobedience this soon? I’m disappointed in you.”
Dee was getting to her feet before he had finished speaking.
“Sorry, Kyle.”
He strode over to her and held her face firmly by the chin.
“That’s master to you,” he said coldly.
“Yes, master,” she breathed.
His grip loosened and he smiled.
“Good girl. Now, I’ve bought you a present. Stay there.”
She stood where he left her, absolutely still and barely daring to move a muscle. Who knew what Kyle might do to her if she moved without permission? The thought alone was erotic and she was almost tempted to move just to see; but Kyle returned before she had a chance and her eyes widened at what she thought she glimpsed in his half-concealed hand.
“Kneel,” he ordered; and she was on her knees in front of him.
He brought his hand round into full view and she saw she had not been mistaken in that stolen glance. He held a leather collar.
“Undress for me, Dee.” The note of command stayed in his voice, but she felt herself flushing at his unconcealed excitement. She tried to stand up, but his hand on her shoulder pinned her down. “No. Stay there. You will undress at my feet.”