When a god desires a mortal woman

Accompanied by Gwenhwyfar, King Arthur is healed on the holy isle of Avalon.  But Avalon is surrounded by the ever-shifting Land of Faerie.  When Myrddin attempts to pass them through, Cernunnos, god of the Wild Hunt, captures Gwenhwyfar and keeps her in Avalon, intending to make her his mistress.

Can a half-fey prince keep her from her Fate?

Enraged that Gwenhwyfar has been abducted, Lancelot swears he will bring her back to Camelot.  A vision of the Holy Grail allows him to find the portal to the Land of Faerie, but Morgan le Fey has other designs for him.

Will Lancelot's love for Gwenhwyfar be strong enough to endure in a world where Time is distorted and illusion reigns? 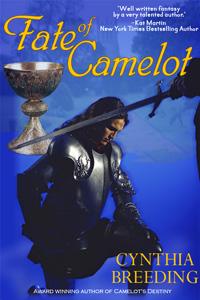 A treat for medieval Arthurian junkies!

Cynthia Breeding's FATE OF CAMELOT focuses on the later days of Camelot: the Grail Quest and King Arthur's healing at Avalon. Cynthia Breeding reshapes the medieval Arthurian texts by returning to the medieval texts themselves, history and modern scholarship. Using these as a springboard for her imaginative vision of the last days, Cynthia Breeding presents a vision of the more mysterious aspects of the Arthurian legends as she incorporates both the pagan and Christian elements. FATE OF CAMELOT will appeal to Arthurian junkies, especially those versed in the medieval Arthurian literary traditions. Breeding incorporates the magical paranormal into FATE OF CAMELOT and yet her details are so grounded in the medieval tradition, both of Arthurian romance as well as the chronicle tradition (medieval historical writings), as seen in Geoffrey of Monmouth etc, giving her story both a historical and magical atmosphere. In FATE OF CAMELOT, Cynthia Breeding develops the Arthur-Lancelot-Gwenhwyfar relationship. FATE OF CAMELOT combines both the Christian and pagan elements in proper proportion to create a tale that does not avoid the French cleric author's vilification of women but rather speaks back to it by incorporating it within the whole context. Unlike her previous romances, FATE OF CAMELOT was published by a small press. While this book may not appeal to the mass market of romance readers (the market for her previous books), I feel like the move to a smaller press has allowed her more freedom to develop her authentic vision of Arthurian romance. If you are an Arthurian junkie like me, FATE OF CAMELOT marks Cynthia Breeding as an author to watch with increasing interest. It seems to me as if this book marks a transition of the author from writing for a modern romance audience to more of a fiction/fantasy/Arthurian audience.
Merri, Merrimon Reviews

over Gwenhwyfar's mouth and pulled her back through the trees, holding her against him. "Don't scream. It's Lancelot. We're going home."

Wildly, she twisted to look at him. Her eyes were blank and he saw no recognition there. She began to struggle.

He gave her a little shake. "Gwen. Come to your senses. It's Lance. Arthur is waiting. We're leaving the land of Faerie."

Her eyes widened a little, but there was still fear.

She moved her head negatively and tried to pull away.

He spun her around quickly and kissed her before she had time to scream. She did not respond; nearly desperate, he cradled her head and prodded her mouth open with his thumbs, thrusting his tongue inside, letting her taste him. His arms moved around her and his hands kneaded her back. Mother, Goddess, don't let me be too late. Not after all of this. Then suddenly she was kissing him back, clinging to him, sobbing in the back of her throat. He leaned back a little, watching her.

"Lancelot!" She was crying now, her arms wound tightly around his neck. "It is you? I'm not living another illusion?"

"No, my love. But we must hurry." Already the sounds of fury behind them had begun to diminish. Lancelot took her hand and they began to run.