Feel the love behind these stories, feel more than puppy love...and get the spice than you may need. Featuring: Doggy Style Date by Milena Gomez & The General's Treasure by Ana Star 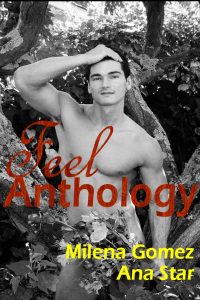 Doggy Style Date began with just an idea. In my mind, I imagined going back to the ending of the movie, You’ve Got Mail, skipping everything else in the movie only to relive the ending. I admit the movie was amazing, but the ending was unforgettable and I wanted to write a story that would start where that movie had ended...

“What a cute little doggy!” Delilah shrieked with joy as a nice little Chihuahua got on her lap. It was the only thing that cheered her up after having such a bad day at work.
“Where’s your owner, little doggy?” She looked for the tag and found the dog’s name. “Pooch!”
Who names a dog Pooch? The owner must be a lazy bastard to not take the time to name his dog right. How do I know he’s a man? Delilah, get over such sexist thoughts. It could be a woman!
“Pooch! Pooch!”
“Your little Chihuahua is here...sir!” Well, he didn’t sound like a woman. I was right!
When the man showed up, a scene from the movie You’ve Got Mail flashed up in her thoughts. He didn’t look like Tom Hanks. His hair wasn’t dark and heck he couldn’t be that old. She also wasn’t a Meg Ryan either. Her hair wasn’t short. It was blonde and curly, almost light pink. If the scene was to be re-filmed, they both would fit perfectly as two destined lovers meeting in a Manhattan park under the New York sky.