Ben Richardson is fading from the world. Beaten down by life, abandoned by his fickle wife and friends, he retreats to his old log cabin to await the inevitable…

Where he becomes the focus of the Fey folk. Ben is ripe to be plucked and turned into one of the Fey. His humanity will be purged, his character twisted beyond recognition. An emissary, Sev-Ho-Ser-Lochy, is sent through the fairy portal to bring the human to the land of the Fey.

Theirs is a forbidden relationship that will not be tolerated by the unforgiving and vicious Fey folk. They want Ben to become one of them and nothing will stand in their way. Not even their own emissary.

Can Holly and Ben escape the all-powerful, vindictive Fey? Can their relationship survive? Or are they both doomed? 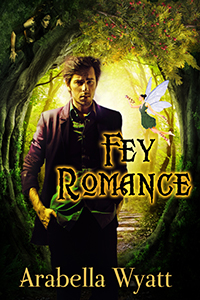 Their task done, the Fey were leaving the human realm and returning to their own dimension, shrieking in excitement and delight.

The Fey arrived at a pool fed by a small waterfall–the portal between the worlds. They circled the pool, their fluttering wings beating the surface, getting faster and faster, creating a powerful waterspout. A dark golden glow appeared at the centre of the vortex and the creatures poured through, passing from the human realm and into the land of Faery.

“It’s true, it’s true,” shouted the Fey as they materialised in their own realm. “The seers were right! There is a human up there ripe for the plucking!”

“He is broken in spirit by the human world and is fading from their reality,” screamed another. “You should see him; his aura is almost white! No colour at all to speak of! He could become one of us. You were right, Abse!”

“Of course I was right,” snapped Abse. No one could truly rule the Fey; they were too anarchic and unbiddable for anything so crude, but they could be guided and those who could guide them could obtain great power. As such, those with the gift of prophecy resented any suggestion that they could make a mistake, for mistakes attracted ridicule, and ridicule lessened power.

“A new fairy, a new fairy,” shouted hundreds of excited voices as more and more of the tiny winged creatures leapt into the air, buzzing in excitement and turning their red sky black.

“We are not there yet,” screamed Abse in fury. “Now is the most critical time. Did you put the malaise on him, as I told you to do?”

“Yes, yes, he is fading even faster now under our power! All is becoming greyer and less interesting to him!”

“Good. Be warned, you mischievous Fey; great care is needed to bring this human into our realm and turn him into one of us. If a single mistake is made, we could lose this human forever.”

“That would be a good thing, too,” bellowed another voice. “Turning a human into a fairy is always a risk. It is against the natural way of doing things. Their power can be too much!”

“You know as well as I do,” shouted Abse, his wings fluttering in anger, “that we face extinction if we do not convert humans to our kind. Would you have us go extinct, Trexor?”

“If it preserves our purity, then, yes,” roared Trexor. In truth, Trexor didn’t care one way or another how new fairies were created. She simply saw an opportunity to usurp some of the seer’s power for herself.

“Fool,” bellowed Abse. “You would see the Fey disappear from the realm with your attitude.”

“Then send your emissary into the human world and be ready for the consequences of failure,” shouted Trexor, wondering how she could sabotage the effort. She decided she would send her own agent, Geo-Oggan-of-Pepp, to ensure the mission was a failure “Who is the emissary?”

“We shall send Ullop-Lun-Tre to do the work,” exclaimed Abse, circling high over the swarm of fairies.

“Ullop-Lun-Tre?” snorted Trexor in disdain, hiding her disquiet. Ullop was, by fairy standards, focused and competent. To gain power over her rival, Trexor needed Abse’s chosen fairy to fail. Inspiration flowered in her mind. “Why not Sev-Ho-Ser-Lochy?” she countered. “She has yet to prove herself.”

“Yes, yes, Sev-Ho-Ser-Lochy can do it!” screeched the fairies, whooping in delight and devilment at the idea. Sev-Ho-Ser-Lochy was considered peculiar even by the slap-dash, chaotic standards of fairy. As such, the idea of sending a deeply flawed Fey on such an important mission appealed to the disordered nature of the fairies and consumed them utterly. They screeched and chattered in insane excitement once more. “A new fairy! A new fairy! Sev-Ho-Ser-Lochy will bring him to us!”

“And if she fails?” demanded Trexor in secret delight.

“The seers will be wrong, the seers will be wrong!” yelled the fairies, aware but uncaring of the power struggle around them and the threat of extinction ahead. The average fairy was too anarchic to be cowed by reality, and within moments, all were dancing in abandonment, singing to the success of Sev-Ho-Ser-Lochy or, alternatively, to the failure of Sev-Ho-Ser-Lochy, with equal glee and malice.