Korin feared a real fight. She’d had so little training, but her inner demon took over before she could be killed. Now she is terribly scarred, inside and outside. But now she is also a feared general and the head of the rebels. Zohak has fallen prey to madness, having accepted the forbidden fruit of power. He is a slave to the same devil who entrapped Vorak, only he is also possessed by the demon snake-dragon Kaliya. He now feeds on terror—literally. Only Korin can stop Zohak’s reign of terror, but he calls upon Vorak to lead his armies. When confronted with such a challenge, Korin fights with Vorak, who spirits her away. He simply cannot resist her. The unexpected awaits them both as they manage to form a plan to vanquish the Devil Eblise and win freedom for themselves and for the kingdom. 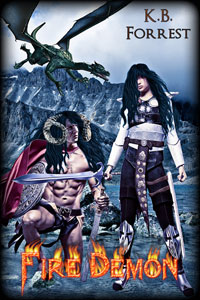 The group of seven wizards had locked hands, making them too powerful for the magi to defeat. They glowed with a greenish iridescent light as they enveloped themselves in a mist that made them invisible to human eyes. They walked forward toward the woman who could feel their approach. She began to scream.

The wizards on both ends of the hand-holding line held sacrificial daggers. This must have been part of their plan—the plan B, if the head sorcerer somehow lost his head. If they succeeded, Eblis would be restored to his power completely. Korin ordered her mount to descend, but she was quite far from them. Now Korin saw with a jolt of horror that in the confusion of the battle, Eblis himself had escaped. He shimmered briefly through his cloak of invisibility. Korin shuddered involuntarily when she saw his true form.

He was shucking himself out of the boy body, and as he did, his head elongated into an angular mask of rage. His skin was old—as ancient as parchment, but it glistened with putrefaction that would have left a corpse that long dead. His ears were mostly cartilage, and they were very long. Pointed at the top, the devil’s ears were pendulant on the bottom. He wore earrings made of human bones. The ear holes writhed with what looked like maggots, but as she looked closer, Korin realized that they were festering, squirming naked humans covered with the slimy effusion of death.

His eyes were black hellholes from which fires spiraled. Occasionally the burning arms or legs of some damned person could be seen thrashing about in hopeless pain. Bags of flesh hung from his eyes, making him look even more ancient and evil. His long, pointed nose was warted heavily and appeared like a pendulous, rotting gourd. The mouth of the beast was the most horrific. Thin, cracking lips surrounded sharp but decayed teeth swarming with creatures ranging from naked humans to insectoid creatures who fed on the humans, while the humans fed on the cheesy decay between the teeth.

Eblis walked awkwardly in a cross between the knuckle walk of an ape, and the dragging of a disemboweled monster. Indeed, his gut bobbed over the ground and his obscene genitals trailed a slimy track as he walked. His distended anus stuck out of the flat buttocks that hung loosely. Worms and maggots dropped from it as he made his way to the woman who struggled and screamed anew, although mercifully, she could not see Eblis’s real form.

Vorak thundered from his position in the army. “No! Korin, stop! Don’t approach that devil!”