A better man would act.

Andy Rowly fears the demon in his painting is real, but the very real fear of being totally alone makes his existence hell.

Death and darkness torment Andy, and his descent into madness seems inevitable until he meets Nor. Bold and funny, she is everything he is not, and offers him a chance at a life filled with love and light.

But before they can share their first kiss, he must overcome his demon, lest the demon overcomes him first. 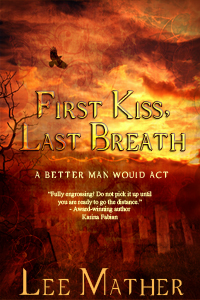 Andy pointed to the grimy bucket on the floor and grinned. “I’m cleaning... This is it, a fresh start.”

Nor smiled and stroked his arm. “I’m so proud of you.”

Tears formed in Andy’s eyes. In a short space of time, Nor had become everything to him.

The moment Andy thought this something changed, like a switch flicked inside his head. The stab of fear in his chest was brutal. The darkness on the wall appeared to respond. The blackness began to throb. It sparkled at the edge of his vision.

Andy tried to remove the importance of Nor from his thoughts but it was too late. Something had shifted in the atmosphere within the hall, within him.

Nor stared at the creeping stains. She pointed at them and Andy’s gut fell away.

Nor stepped toward the wall, her expression puzzled. She reached out, fingertips inches from the darkness she couldn’t see. Andy felt the evil growing, the malevolence gaining momentum. He threw himself in her path and she pulled away in surprise.

Andy had no response. There was no sane excuse for his behavior.

“I’ve just washed it,” he said after an age.

Nor stared at him skeptically.

“Sorry. I’ve been trying to scrub the place clean.” He pointed at the bucket of water.

“Oh.” Nor took a step away from the wall. “This all must be a nightmare for you.”

Nor rubbed his arm gently, looked toward the sitting room. “Is that where...”

“Yes,” Andy said distantly. He moved Nor away from the wall. He could feel the evil. He sensed something bad was about to happen. He needed to get Nor out of there, and fast.

“Listen, we should probably go for a walk and get some fresh air. I need a break.”

Behind her, Andy choked as the stain bulged outward. The streaks of black peeled away from the wall to form snaking tentacles. They quivered and squirmed then stretched toward Nor.

Andy couldn’t answer. He was frozen as the tentacles closed in, to grab Nor, to drag her screaming into the darkness. They whipped and reared just inches from the back of her head. Behind her the stain in the wall became a face. A familiar demon looked out into the house.