First Time For Everything

First Time For Everything by Mary Borsellino

They say that you always remember your first kiss, your first love and your first time. When they all coincide on the eve of a new millenium and with the boy you’ve been wanting for years that‘s definitely the case.

Two reporters find that jousting for the best story is a real passion. The endless city hall meetings are always good for a hot lead, and things are even hotter behind closed doors where their passion makes the words come alive

When the new boss invites you to dance at the office Christmas party, you’d be a fool to say no. Especially since she’s hot, powerful and downright scary. Has she noticed the way you’ve been watching her? Perhaps tonight everything you’ve dreamed could come true, the only way to find out is to follow your nose and see where it takes you.

Its a hot and steamy summer when Allen is sent to the farm for a long day of sorting out the accounts. The job is made far more interesting by the farmers daughter who turns out to be hotter than the summer.

We all have things that push our buttons, things that turn us on even when we’re supposed to be working. For Matt it’s shoes. He’s been enjoying daydreaming his life away to the clicketty clack of high heels. When fate walks up to him wearing killer heel the only thing he can do is to put the dreams on the pillion and ride in to the sunset.

These stories have also been published in Five Minutes Fantasies Two 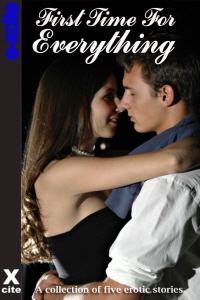 First Time For Everything

I lost my virginity on New Year’s Eve. It’s very likely that I’m far from the only person who can claim this. Everyone was a little crazy that night. I think some people thought it was the end of the world, or maybe they just wished it was.
I was eighteen years old, fresh out of high school, and I’d never been kissed. All through my junior and senior year, I’d harboured a desperate, profound crush on my best male friend, Andrew. He’d come over to my house in the mornings before school and play video games with my little brother.
I’d watch his hands, wrapped around the joystick on the game controller. It sounds absurd in hindsight, but eighteen is still a teenager, and my hormones were going wild. Watching his long, clever fingers cradle the slick black plastic of the controller’s shaft was enough to leave me flushed and distracted all through my morning classes, the dark navy panties of my school uniform soaked damp.
Sometimes, if I could convince a teacher to let me out before the bell, I’d escape to the girls’ bathroom and masturbate in one of the stalls. I’d bite my lip and rub furiously at that wet, uncomfortable cotton, my breath panting as I silently imagined Andrew’s slim, clever face and beautiful hands. It never felt like a relief, though. Nothing did.
I was an undersexed mess, and Andrew was none the wiser. He had girlfriends from time to time, but never seemed as interested in them as he was in me. The trouble was, it seemed like all he wanted from me was friendship. Honestly, I have no idea why he even wanted that; I was a babbling, silly idiot when he was nearby.
So there we were, on New Year’s Eve, walking up the high hill near our friend Justine’s house toward the local liquor store. It was after ten already, and our party had been going full swing for hours. All the drinks were used up, so we’d been sent out for more.
‘What’s your most embarrassing confession?’ he asked, for no particular reason.
I’d already had two vodkas, and the words slipped out before I could stop them. ‘I’m a virgin. I’ve never even been kissed.’
He stopped, and turned around. His eyes glittered in the low light of the streetlamps. His breath, beer-bitter, was hot and damp on the air between us in the second before his lips touched mine.
‘You?’ he murmured, a little slurred from his own drinks. ‘Never been…’
My first kiss. A warm, heavy press of his mouth on mine, closed and almost chaste.
Then he grinned, stepped back, and started striding up the hill again.
‘Now you have!’ he called back to me. ‘Hurry up!’
I brought my fingertips to my tingling lips, and ran after him.
My second kiss was five minutes later, on the walk back down the hill, two wine bottles clinking in a plastic bag against my thigh as I pulled Andrew’s face to mine with a hand twined in his hair. Our mouths opened against each other. It felt like a part of me was melting.
Back at Justine’s house, we gave our hostess the drinks we’d bought and then, our fingers laced together and laughter zipping in the air between us, we crept down the hallway to the unused guest bedroom.
‘You’ll miss the best parts!’ someone called after us, but as far as I could tell that’s exactly what I was finally going to find.
The sheets were a plain rose cotton, a dull delicate colour. I shoved Andrew down onto the mattress, preferring the wild flush of his cheeks to the fabric’s shade.
I could feel his pulse on my tongue when I sucked at his neck, my thighs straddling his lap, and it made me wonder if I’d be able to follow his heartbeat while I sucked his cock later, when we had our energy back.
His hands were behind me, unhooking the catches of my bra. Those clever fingers had done this before, with the bras of other girls, but I didn’t feel inexperienced or stupid compared to him. It was like my body knew exactly what it wanted, and how to get it.