Warning: This book contains the use of an Ouiji Board.

A barnstorming pilot fresh from WWI and a young woman who is trying to find her place in Al Capone's Chicago. A bootlegger's daughter and a wealthy devil-may-care good-time-Charlie. A devious French pilot and a wealthy, but innocent gal. In the midst of parties with illegal booze, where everyone kicks up their heels to the Charleston, will any of them find happiness? Only if they pay attention to what the Ouiji Board tells them and manage to outwit the dangerous bootleggers hunting them down. 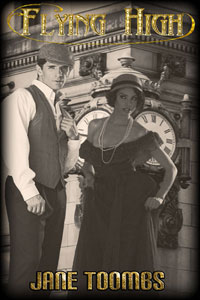 She pulled free of him and he watched her take a deep breath. "What did you tell Mr. Ciardi?" She flung the words at him as if in a hurry to be rid of them.

Taken aback, he frowned. She was right, it was none of her business. "What brought that up?" he demanded.

"Your mention of a reward."

"I don't need dirty money," he snapped, irritated that she didn't realize he wouldn't be caught dead doing any kind of a job for bootleggers. He had, in fact, turned Louis Ciardi down flat. Politely, since it didn't do to insult someone with his connections. Louis worked for Capone, the man who owned Chicago.

"I'm glad." Her tone was subdued, but she gazed directly at him. "I didn't want to think you were that kind of person."

A fella could lose himself in those eyes, climb up and up until he lost control and came down in a tailspin. She was the niftiest little number he'd come across in a long time. "Now that you know I'm not that kind of person--"he paused and held out his hand--"friends?"

She took it, holding on with a damn strong grip for a woman, and he found he didn't want to let her go, wanted instead to pull her into his arms.

He released her hand reluctantly to finish tying down his Jenny. To his surprise, she insisted on helping even after he told her she didn't need to.

"If I'm going to learn to fly, shouldn't I know everything about caring for the aeroplane, too?" she demanded.

He couldn't argue with that.

Charlie pulled up as they were finishing. "See you found yourself ground crew," he said to Bruce.

"Prettiest one I ever had," Bruce told him.

"Seeing as how Christie's with you," Charlie went on, "you won't mind if I make a stop at Navy Pier. The two of you can do a little sight-seeing while I take care of a small matter."

"Fine with me," Bruce said. Which it was. A perfect excuse to spend more time with her.

When Charlie left them at the entrance to the pier, Bruce's spirits were momentarily dampened when the first words out of Christie's mouth were, "He's going to meet Angie. He's done it here before. What are we going to do?"

Bruce shook his head. "Nothing. It's Charlie's affair, not ours."

"But it's dangerous for him. You said so yourself."

"And I told him the same. All he did was laugh. We can't do any more, short of hog-tying him. I can't see Charlie taking kindly to that, can you?"

She sighed. "There must be something."

"Remember when you were a kid? Maybe this didn't happen to you, but I recall that the more someone tried to make me stop doing something, the more I was determined to do it."

"I do remember being like that sometimes. But Charlie's not a kid."

"No, he's full-grown, a guy who thrives on danger. Angie's background may very well be part of her appeal where he's concerned."

"And what will happen to her if her brothers discover what's going on?"

"They could always shut her up in a convent."

"Be serious. We could try reason."

"Christie, those two are playing with fire and they know it. Reason doesn't put out that kind of flame." It belatedly occurred to him to wonder if she had more at stake than an altruistic interest in Charlie's welfare. Was she in love with him?

"I just hate to be part of something clandestine," she said.

"We're not helping them, so we're not taking part."

"We're not alone. Margaret seems to be aware something's going on."