From one of the greatest and most popular literary erotica writers of today, highlighted by TIME OUT LONDON amongst the top 20 in the genre. comes a major collection of short stories gathering some of his best and sexiest stories. Moving between London, New York, Paris, New Orleans and tropical beaches these are dangerous tales of sexuality and emotions unbound, combining sex and mystery, despair and tenderness and guaranteed to shock and delight the reader's senses in the most extreme way. Jakubowski's unique brand of erotica - call it 'erotica noir' - offers a edge-of-your-seat stories that are sure to arouse and alarm. 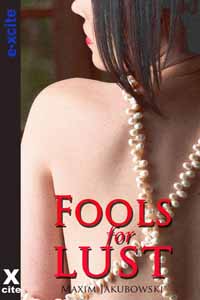 He had often promised to take Kathryn to New Orleans.
But it had never happened. They had spectacularly fallen apart long before the opportunity arose. In fact, the travel they had managed to do in between feverish fucks had proven rather prosaic. So much for promises. They hadn’t even visited Paris, Amsterdam or New York either.
So, whenever he could, he now took other women to the Crescent City.
For sex.
And fantasised about Kathryn’s face, and eyes, and pale breasts, and cunt and more.
New Orleans was for him a city with two faces. Almost two different places, the aristocratic and slightly dishevelled languor of the Garden District on one hand and the hustle and bustle of the French Quarter on the other, contrasting like night and day. The touristic charms concealing darker, ever so venomous charms. The heavy placid flow of the Mississippi river zigzagging in serpentine manner through the opposing twin shores of Jackson Square and Algiers. The gently alcoholic haze of New Orleans days and the enticing, dangerous attraction of fragrant New Orleans nights. Nights that smelled and tasted of sex.
He loved to see the women sweat as he made love to them, enjoyed the feel of bodies sliding against each other in moist, clammy embraces as sheets tangled around them. He took unerring voyeuristic pleasure in watching them shower after, washing his seed away from their openings, cleaning away his bites, the saliva that still coated their nipples, neck or earlobes which he had assaulted with military-like amorous precision.
Those were all memories he treasured. Stored away for all eternity in his mental bank vaults. The curve of a back, the soft blonde down slowly being submerged in a small pool of perspiration just inches away from her rump, highlighted by a solitary light bulb, as she kneeled on all fours on the bed and he breached the final defences of her sphincter and impaled himself in her bowels. The sound of a moan, of pleasure, of joy. Ohhh ... AAAAHHH ... Chriiiiiist ... The tremor that coursed through the girl’s taut body as he discharged inside her or she rode the ocean waves of her oncoming orgasm.
Yes, New Orleans, his city of sex.
Endless walks through the small streets between hotel room episodes. Invigorating breakfasts of beignets and coffee and ice-cold orange juice at the Cafe du Monde; oysters and thick, syrupy gumbo at The Pearl off Canal Street; loitering hand in hand in the markets full of the smell of spices and seafood, chewing on garlic-flavoured pistachio nuts; obscene mounds of boiled crawfish at Lemoyne’s Landing; hunting for vintage paperbacks through the dusty shelves at Beckham’s; po’boys at the Napoleon House; zydeco rhythms at the House of Blues; a routine he could live on for days on end. Until he would tire of the woman, because she bored him once past the mechanics of fornication, never said the right thing or talked too much or simply because she wasn’t the woman he really wanted to be with in New Orleans.