A tale of time travel, love and murder!
It's 2015 and Patsy Lyndell, cub reporter for the Tucson Clarian, and Joe Mack, an Arizona State Patrolman, investigate a double homicide on a lonely road near Slag, Arizona, an old ghost town.
It's 1885 and Pete Larkin, an Arizona Ranger, and his young friend Jimmy Sullivan, investigate the murder of Pete's pa and his pa's best friend on a lonely road near Slag, Arizona Territory.
It's 2015 and Antonio Piazza DeAngelo has found a way to travel though time. Planning to steal treasures from the past, he defies his grandfather Vincente Piazza DeAngelo, a reformed mob hitman. Accidentally, the time machine brings the four investigators together, suspecting that the murders in 2015 and 1885 have been committed by the same killers.
It's 2015 - The grandfather fears that his grandson's plans to loot the past could change the course of history and perhaps their very existence.
It's 1885 - Pete and Patsy discover they have found the missing pieces to their lives, but with little hope they can bridge the time gap.
It's 1850 - It all comes crashing down in a climactic battle between Antonio and his grandfather, and with the help of the two lovers, resolves to turn Antonio's greed into Fool's Gold.

About the Author:
Albert William Palmer was born in 1934 in Gooding, Idaho. He and his salesmen spent 35 years traveling as a manufacturer's representative covering the Pacific Northwest. During evenings in many motels he wrote short stories to pass the time. He has been married to Mary Clark Palmer for 58 years, has two daughters, Karen Smith and Judy Blough, and two grandchildren. Fool's Gold is his first novel. 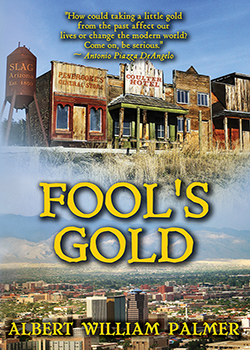