For The Love of Jake

Ashley Moore, like all the other models, cannot stand the weedy, red-headed photographer Jake, with his straggly beard and foul mouth. However, Jake turns out to be a rather quiet, dark-haired, almost handsome man who is intimidated by beautiful women.

When he's accused of a rape he could not have committed, Ashley finds herself taking his side. In the process, she not only puts herself in danger of losing her heart, but her life as well. There are people who think sex and pain form a perfect combination, and Ashley may find herself in way deeper than she could possibly imagine. 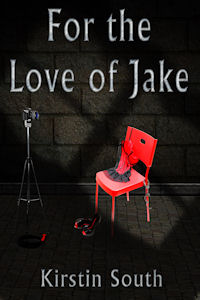 For The Love of Jake

What people are saying about FOR THE LOVE OF JAKE...

Romance Junkies’ Kimberley Leslie says: "FOR THE LOVE OF JAKE will have you laughing from Jake and Ashley’s sexy escapes. Before you know it, you are smack dab in the middle of a story that makes your heart speed up, and reading as fast as you can, just to find out how they get out of the mess they’re in. Kirstin South is a talented author, one that I will be watching for future releases."

~~~ A bizarre romp! In For the Love of Jake, Ms South interjects humor, helplessness and strength of will into this story of two people finding a strong sexual connection as they look for ways to escape their tormentors. If you are not squeamish, be sure to pick it up ~~ Jill Diamond JERR RATING: Simmering

~~~ Ashley Moore's modeling career is about to take off. In order for it to take off, she is going to have to take off all of her clothes in front of the obnoxious photographer Jake. Jake is rude and insulting and Ashley decides she hates him from the moment they meet. She deals with his insults during the session and gives him back some of her own. When she leaves, she hopes it is the last time she has to deal with him. That night, when she has an erotic dream about Jake, she realizes there may be more to him then meets the eye. The success of the photo shoot with Jake results in Ashley getting the biggest modeling job of her life. It also gets her into a world of trouble. Jake has been accused of a crime he didn't commit and Ashley is the only one who can help him. When Ashley finds herself in jail, along with Jake, she knows her career is over. After a bizarre twist, Jake and Ashley are bailed out of jail by an anonymous person and end up prisoners in a mansion of sexual delight. During the quest to prove Jake's innocence, they find themselves in danger, and some very unusual sexual encounters.

This book has a stimulating story line that will keep the reader wondering what Jake and Ashley will be doing next. I found this book to be a blend of amusing pillow talk and very explicit sex. The magnetism between Jake and Ashley was incredible and the combination of humorous sex along with an interesting couple made for a very hot and enjoyable read ~~ Reviewed by: Jennifer for Angel Fire Reviews

She must have come to the wrong place. Again.

And then a voice from nowhere said, “You’re late.”

“I…I got lost,” she stammered, startled by the sound. “All the factories look alike.”

“Excuses are for catfish,” the voice said. “Never mind. You’re here. Get undressed.”

“Wh…what?” For the second time within a minute, she found herself stammering.

“Y…yes…” She had to stop this. Whoever it was would think she had some kind of impediment.

“Look, I didn’t apply for a nude modelling job.”

“Look yourself, kid,” the disembodied voice continued, “you’re obviously new, so let me explain a couple of things to you. There are only two kinds of men in the fashion business…the designers and the buyers. The designers want to put clothes on a nude woman, and the buyers want to tear them off. Either way, they want to see the nude body they’re buying. That’s my job.”

“I’m not either. I’m not selling clothes. I’m selling you…in my pictures. So, all I want to see is you. Forget the clothes.”

“Seems I’m nude to everyone,” she noted.

“Do I ever get to see you? Or are you going to remain a ghost in the walls.”

“That hardly seems fair. Surely both of us should be starkers.”

“Fair is for balls hit to center field,” the voice said. “This is my place. I call the shots.”

“Then you must come over to my place and I’ll take some of you in your nothings.”

“Let’s keep this businesslike,” the voice grunted. “So you’ve got ten seconds to be in the buff. After that, I rip your clothes off and throw them down the elevator shaft, comprenez?”

“Gotcha.” She swallowed hard and pulled her tank top over her head, allowing her fullish breasts to bounce free.

“Gotta do somethin’ about those breasts,” the unseen voice said.

“You want bigger?” she gasped.

“Everything’s getting downsized these days. I don’t see why my boobs should have to follow the trend.”

“You wanna be an expensive model, or just be a cheap whore?” the voice asked. “Get ‘em a tuck job. Time’s money, and you’re wasting it. You got panties under them shorts?”

“Take them both off at once. And your shoes.”

“You got a place where I can hang my things?”

“Does it look like it?” the voice sneered. “Kick ‘em all into that corner. There’s nothing big enough in there to walk off with them. I know. I swept last month.”

“Look.” She stopped in the act of pulling her shorts and panties over her hips. “Are you sure I’ve come to the right place? I was expecting…”

“I’d settle for a camera, even,” Ashley said. “And maybe a photographer behind it.”

“Voilà.” A man stepped out from behind a stack of cartons she had hardly noticed amid the general clutter. “Your heart’s desire.”

Ashley took a good look at her ‘heart’s desire’. He was maybe twenty-eight or nine and shorter than she was, so he stood maybe five-foot nine and she doubted if he weighed as much as her one-twenty. He had long, unkempt red hair, and the pasty white complexion that often goes with it. A little scraggly goatee, still dripping wet from his shower—At least he showered!—and milky blue eyes completed his distinguishing features. But they were hardly the last details of his unpleasant first impression. Despite his recent shower, his dirty fingernails and the filthy Band-Aid on his index finger rather offset whatever cleanliness he had achieved, as did the fact that he wore a pair of his rumpled dungarees and apparently not much else, for he had no shirt and she could see no waistline of underwear at the top of his dungarees’ leg holes. Likewise, his feet were bare and already—or still—covered with grime.

“If I was looking for a man, I guess I have a right to be,” she said, still irritated by his rudeness.

“And you got me. I’d say sorry, but I’m not. I am, however, a photographer. Surely you don’t find the idea of posing nude before me threatening now that you’ve seen me, do you?”

“I don’t know,” Ashley said. “They say small dogs—mongrels in particular—are the most dangerous.”

“Only to other dogs. So stop pretending you’re a bitch and strip, for Chrissakes. Or I’m likely to show you my bite is worse than my bark.”