Forever Bound - Book One in The Bound Series

When a soldier and a surgeon explore their darkest fantasies, they find that submission can be a gift of the heart... Aaron Chambers is an Air Force pilot and a consummate soldier. He is strong and always in control. John Castle is a surgeon; his intelligence is daunting, as is his success. But when a twist of fate causes John to lose a patient, he finds himself mired in a downward spiral of doubt and loss of control. Aaron's rescue plan is simple: to give his soldier's will and body for one night to John. But hatred-filled eyes watch master and willing slave play, and riddle more than their playground with bullets. It is a fight for survival. It is a fight for love. It is a fight that leaves John and Aaron forever bound to each other. 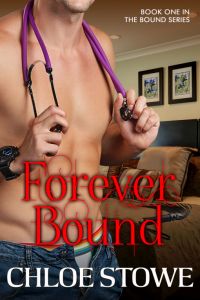 Forever Bound - Book One in The Bound Series

The shudders of the spent orgasm slowly ceased, abating into only a delicious memory that John would gather around his shoulders when the world turned cold.

John Castle was warm most days. The passion he had for his career burned brighter every day, it seemed. He lived for the lives he had a hand in saving, and he saved most. There were those, however, whom he lost, like the poor woman today. It was those lost lives, the ones whisked away without warning, without giving him a fair chance to fight for them, that chilled him to the core.

Closer, tighter, he held Aaron to his chest. It was this control that Aaron had gifted him tonight—had forced down his throat, literally. How could a soul feel anything but warm holding such a heart in his arms?

John looked down at the sleeping face. Aaron would wake in the morning his usual S.O.B. self, but until then the spent bastard was simply angelic. John softly laughed at the absurdity of their lives and their love. He whispered into the sweat-soaked brown hair, “My angel with fighter pilot wings.”