When Lord Julian Mandeville-Drake stumbles upon an ethereal stranger hiding within the hollow of an ancient oak in the forest of his ancestral estate, he never imagines that she might prove to be the unwitting instrument of his destruction. Fortunate is the story of a man governed by sins of the past and his struggle to accept salvation through the constancy and love of the one woman in the world forbidden to him. 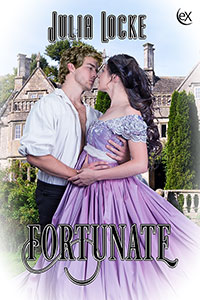 The sun was just beginning to rise above the distant horizon, a perfect sphere of pale yellow in a sky so washed with rain that only the faintest trace of blue remained when Julian Mandeville-Drake stepped out onto the terrace of Stonewycke Manor, intent upon an early morning ride. He absently tugged his riding gloves on and drew in several breaths of cool, clean air, struggling to banish the clinging fragments of the familiar nightmare that had tormented his sleep. Beneath his well-worn boots, the blades of grass were crisp with frost. He strode toward the stable with his head bowed, still concentrating on clearing his mind and thus unprepared to discover that he no longer had the day to himself.

“Julian.” At the cultured tones of his father’s voice, he froze to a halt. He could feel the muscles of his body contract with loathing. Stiffly, he turned around to face Harrison. His father, as usual—and in contrast to him—was immaculately dressed in a pearl-gray coat, his cravat folded just so and centered perfectly beneath his freshly shaven chin. “It’s apparent to me that you have no pressing engagement this morning,” Harrison said, gesturing toward Julian’s threadbare linen shirt and tight pantaloons, which he preferred to wear when walking or riding in the country. “Yet you ignored my request to meet me in the breakfast room.”

Julian raised a brow at the idea that his father might command him. Reflecting on his past behavior, Julian found it curious that Harrison persevered in the belief that he would one day fulfill the duties of an obedient son. It was not only tiring but offensive. He held his tongue, reluctant to surrender any unnecessary syllables to the other man.

The silence spun out between them until Harrison finally relented. “There’s a matter I wish to discuss with you. Do you mean to attend the Delafields’ dinner party?”

It wasn’t often that his father managed to surprise him, but now Julian was taken aback. Of the countless matters Harrison might have chosen to broach with him, his social calendar was of such little significance that his suspicions were immediately aroused. “It is for this that you’ve risen so much earlier than is your habit?” Harrison’s gaze slid away, and Julian prepared himself for the lie that was sure to follow. His father would be surprised to learn precisely how closely Julian studied him. This attention sprang not from affection, but from ever-simmering distrust. Julian had discovered long ago that Harrison was a deceiver, and his nightmares served as a constant reminder of this truth.

Julian noticed the tremble in his hands before he thrust them behind his back and his shift from one foot to the other. Whoever this stranger was, she seemed to unnerve his father. This alone was enough to engage Julian’s curiosity. “She shall be staying with them through the end of the season.”

“Hoping to trap some wealthy fool into marriage then,” Julian interpreted.

“She’s a young lady, so of course securing a husband will be of the utmost importance to her!”

Julian scoffed. It was the most common motive of every unattached female. So why try to disguise it so delicately? “I must admit I fail to comprehend how this pertains to me.”

“I suppose it doesn’t. But I would ask that if you should by chance meet Miss Campion, you treat her with the respect her position as a gentlewoman demands.”

“Why, Father,” Julian injected a wealth of sarcasm into the title. “I resent the implication that I would fail to conduct myself appropriately in the company of our neighbors’ cousin. Truly, it is a wound to my soul to perceive your lack of faith in me.”

“Julian, you misunderstand me.”

“Do I?” Julian drawled carelessly.

“Yes. I only meant to say that young women can be so very impressionable. And as you’re not inclined toward marriage, I believe it would be best you avoid Miss Campion altogether.”

“How is it that you imagine to know the desires of my heart? Perhaps they’ve altered course, and I’m now of a mind to get myself leg-shackled.” Julian tossed the notion out without any degree of seriousness. But reading the anxiety in the lines of Harrison’s body as he stepped forward with a hand extended imploringly, he was encouraged to further emphasize the falsehood. “Indeed. I feel myself growing increasingly bored with my bachelor life. It’s possible that taking a wife would be just the cure I need.”

“I plead with you not to engage with Miss Campion, Julian. As she is the cousin of one of my dearest friends, I would not be pleased should you trifle with her heart and lead her astray.”

Julian’s careless shrug was the only reply he was willing to give. And having lost interest in toying with his father, he pivoted on his heel and sauntered away, already dismissing the conversation from his mind.