Escaping to France in the wake of a failed marriage, Mandy attempts to put the past behind her and indulge in a change of scenery. Bad memories fade as the delights of her holiday destination reveal themselves. With British men off of the menu, she is determined to sample the local fare.

A chance encounter following an early evening trip to the beach allows Mandy to experience some of the local delicacies. But, with her appetite whetted all she can crave for is more.

Eat Me by Elizabeth Cage

Tired after a hard day at work all Joanne wants is to go home, relax and indulge her sweet tooth. A chance encounter at the bus station results in a journey home by quite a different route. Her unforeseen diversion is not without its delights. As the evening unfolds she discovers an appetite that needs to be satiated, and is soon treated to a gourmet feast from a menu of the very risqué kind.

Gathering ingredients to make a soup at the local supermarket, Sophia encounters the highly charged and seductive Samantha, and is immediately enchanted. Intoxicated by her presence she invites Samantha for a culinary lesson in the preparation of Vichysoisse. As the cooking begins, intimacy, passion and anticipation quickly swirl into a heady infusion that consumes the both of them. Unlike the cold soup that brings them together, their relationship soon progresses from a light simmer to boiling desire.

When gorgeous celluloid dame, Brinn Stones saunters’ into his office, hard-nosed PI Jim Brubaker is offered a case he simply cannot refuse. Charged with the task of unearthing a seedy blackmailing scam, Brubaker is forced to trawl the seedy underbelly of the City of Angels. As the case reveals itself, he soon discovers that Tinsel Town is not quite as it seems. It’s a dog-eat-dog world, where just about anything goes. 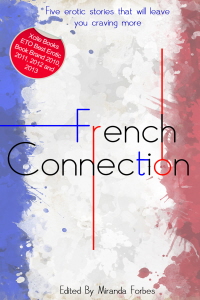 It was the two naked men from the beach, standing one either side of her. She’d fallen asleep.
Before she could gather her wits, one of the men spoke. “Je suis Philippe.” He pointed at his friend. “C’est Jean.” He smiled a perfect white smile. “Vous êtes très belle.”
Mandy stifled a laugh. Here she was, naked, and with fingers stuffed inside her sticky cunt, and a couple of Frenchmen were introducing themselves as if they came across this sort of thing every day!
“Je suis Mandee,” she said, wondering briefly if she was either still dreaming, or losing her mind.
The pair looked down at her, their hungry eyes questioning. Mandy stared up at their big stiffening cocks, her nipples growing hard. Heart thumping, she spread her legs wider, a universal signal for ‘I want cock and I want it now’.
Philippe and Jean knelt beside her. Philippe stroked her face and kissed her mouth with a sensuality that blew her away. If only British men could kiss like that! As his tongue twisted and probed, Jean used his to lick her heaving breasts. Mandy groaned as teeth gently nipped a nipple. Philippe covered her cheeks, her nose, her eyes in kisses then drew back, showing Mandy his huge, fully-erect cock. She grasped it with her left hand and began to pump.
Jean stopped sucking her nipples and shuffled up until his hard, veiny monster hung over Mandy’s face. Still pumping Philippe’s iron erection, Mandy reached for Jean’s with her hungry mouth. Jean gasped and pushed himself in and out, in and out. Mandy’s pulsing hole bubbled with fuck juice.
Breathing heavily, Philippe stayed Mandy’s pumping hand. “Non, non…”
He crawled down between her legs and circled his tongue along the inside of her thigh. Mandy tensed, desperate for Philippe to touch her, lick her, suck her. Then his mouth was clamped around her labia, his tongue flicking rapidly over her swollen clit and in and out of her gaping hole.