Daren Van Sant, Manhattan-bred blond, hunky protégé and boy toy top of Georgetown professor and East Asian art curator at the Smithsonian’s Free Gallery of Art, Clifton Weldon, goes to Tokyo, Japan, on a year’s sabbatical to learn more about Japanese art. The style of Japanese art he focuses on is that of the ancient art of Nanshoku—the particularized depiction, since the medieval period, of male-on-male sex acts in traditional costume and setting. Daren converts to a whole new persona in Tokyo, becoming Reno, the American cowboy gaijin kagema—the foreign male prostitute—working in an art gallery specializing in Nanshoku; living with the aging gallery owner, a foremost Nanshoku technique artist; and becoming one of the most popular male prostitutes in the kagemajaya—male brothel—world of Tokyo’s Shinjuku-chome gay district. As Haruo, Reno’s Japanese mentor and bed partner, declines in health, the gaijin kagema must decide whether to return to Washington, D.C., as Daren or remain in Japan as Reno. 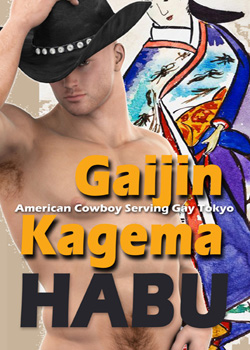 From 1:00 to 3:00 most afternoons, Reno was a kagema, a male prostitute, and, in his case, a high-in-demand gaijin kagema, foreign male prostitute, at the nearby Shinjuku Prince Hotel. He was in high demand not only because he was a tall, well-built, beautiful, hung hunk, but also because he was a Westerner—the magic of being an American, no less. He had adopted his cowboy persona and dress to emphasize that he was a gaijin kagema.

He strode into the lobby of the Shinjuku Prince Hotel at 12:55, stopping at the concierge desk long enough to be directed to the coffee shop. He had been promised lunch there.

Kazu Mori was a nervous, reticent businessman from Okinawa. Reno had a disarming way of belying his brash appearance and making such men comfortable with him in small talk, in low, soothing tones, and compliments of the man’s looks. Kazu Mori was pleasant enough to look at and downright good-looking when he relaxed. He was in his forties—most men who engaged in Reno’s services at this hotel were—and was slight, almost squat in stature. He was wooden in mannerism at the beginning of lunch but Reno had loosened him up considerably by the end of lunch when the man was paying cash on the bill. Reno didn’t have to be told the Okinawa businessman didn’t want the appearance of two lunches on his hotel accounting.

Mori was even more loose upstairs in his hotel room, where Reno fucked him in a position he’d never been put in before but that he loved.