Tessa North is a serial killer.

Secrets and lies are part of her life. She hides them well while leading a peaceful and pleasant life in the pretty Northern California town of Blackport.

Until one day Tessa’s life changed with the ringing of the doorbell when she received an unusual and anonymous package. Even more mysterious was the enclosure card with one printed word: Basement.

Excited at the prospect of a fun mystery, presumably from her quirky best friend Theo Bloom, Tessa takes her new gifts to the basement.

Suddenly the fun ends as a real mystery begins. When Tessa’s phone rings, the situation becomes even more mysterious by an unusual conversation with a strange man named Joe who turns her life upside down.

Soon, Tessa begins to discover clues that take her to the nearby lakeside town of Foxwood Bay—the location of the infamous Merrick Massacre and the old Merrick Insane Asylum.

Tessa North is about to discover that there are more secrets and lies in her life than she knew about. 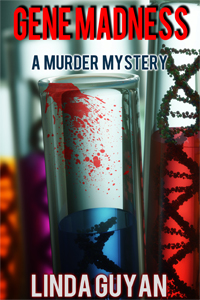 “Madness is fascinating, don’t you think?”

“Who could not be intrigued by insanity?” Douglas Ryland II concurred with his business partner as they both gazed at the naked female corpse on the metal table in front of them.

Ben Merrick and Douglas Ryland were intelligent, idealistic, and driven young men with their lives ahead of them, filled with hope and dreams and success in their scientific endeavors.

Fascinated by the corpse, Ben understood the gravity of what it meant for their research.

“Insanity stirs my scientific soul into a frenzy of curiosity.”

“Add heredity to insanity, and you could have a deadly combination,” Douglas added. “Miescher was on to something in eighteen sixty-nine. This molecule he wrote about in his eighteen seventy-one publication is the key to who we are as human beings.”

“Our experiments have already proven that fact, as far as I’m concerned,” Ben Merrick began. “Madness in the genes is handed down from our ancestors with the same blood disease.”

“But whether a person acts on that madness gene or not is something else we must prove,” Douglas said. “There are many factors to consider in a human’s life.”

“Which will win out?” Ben posed. “Blood or family?”

“I suspect it’s a bit of both,” Douglas suggested. “But I believe that blood is stronger than environmental family ties any day.” Ben nodded his agreement.

“Gene madness can be connected to a long list of insanity diagnoses, as well as a host of violent tendencies, including murder.”

“The German scientist was on to something remarkable,” Ben said. “And we will prove it, Douglas.”

“I agree, Ben. Frederich Miescher’s chemicals, nuclein, in the white blood cells was a scientific breakthrough, but he did not realize the far-reaching implications of his discovery.”

“But we do,” Ben said, smiling as Douglas nodded his understanding.

“This genetic anomaly is an inherited disease of the blood,” Douglas stated emphatically. “And we have discovered it!”

“It’s official now,” Ben agreed as he picked up the letter they had just received in the mail from the United States Patent Office.

“That it is,” Ben said excitedly as he picked up the magazine they had received just yesterday. “And we are published, Douglas!”

“This is a proud moment, Ben,” Douglas told his friend as he reached out for the important periodical and read the cover heading aloud. “The New England Journal of Medicine. April eleventh, nineteen twelve, volume one hundred sixty-six, number fifteen.”

“A moment in time to remember, my friend,” Ben told him as Douglas scanned the Contents and read it aloud proudly.

“The Lineage of Blood Disease by B. G. Merrick and D. H. Ryland.”

“I like the sounds of that,” Ben said as he looked down at the corpse on their operating table. “It’s that blood disease that creates killers like this woman.”

“She’s our chance to prove that some people are simply born bad,” Ben said as he examined the woman’s wounds, her naked, cold, mottled white skin having no affect on him.

“I believe that without a doubt,” Douglas added with emphasis as he pulled the metal instrument tray close to the table.

“That is my goal, Douglas. It is my métier in life,” Ben said as he picked up a scalpel.

The two young men began the woman’s autopsy with more excitement than morticians should possess. These men had ulterior motives for their obsession.

This woman was important to the Experiment.

Just east of the Merrick-Ryland Funeral Home was a narrow, winding road, Victoria Lane, which led up a steep hill to their large and stately residence, as well as the private family cemetery. The large residence was separated by an excessively—yet necessary—long, enclosed connecting walkway. At the end of the quarter-mile long passageway, another massive building loomed far to the right of the other.

This was the asylum.

The town of Foxwood Bay began calling the huge buildings on the hill, the “Castle.” Not surprising since they did appear to be just that from the vantage point of the town below.

In fact the manor house was, indeed, a castle. Benjamin Merrick had it shipped piece by piece from England as a wedding present for his wife, Catrina Bishop. The massive Victorian with its Gothic spires, gables, and turrets sat high on a hill overlooking Foxwood Bay on seventeen acres of prime, wooded land. A narrow, five-mile road winding through the woods led to the main gate, keeping the prying public far away from the asylum grounds. In the basement below the residence—Merrick Manor—was the laboratory.

Outside the huge, black, wrought iron gate flanked by stone pillars was a private gated cemetery to the right. Another, for patients, was at the rear of the building. Small, round stone markers engraved only with the patient identification number kept them anonymous. Just outside the gate to the left were more woods and a steep incline down the mountain with a view of Foxwood Bay Lake.

The Merrick-Ryland Lunatic Asylum was their fathers’ masterpiece. Not only did they build a home for the insane and develop treatments for them, it marked the beginning of the Experiment.

It was 1888 when Gabriel Dane Merrick and Harrison Douglas Ryland had a vision for the future. Not only did they endeavor to cure the insane, they were both dedicated to finding the cause. They passed on their knowledge, as well as their obsession, to their elder sons—their heirs. Benjamin and Douglas eventually branched out to the funeral home business, where they could continue their parents’ and their own experiments under the guise of serving the needs of Foxwood Bay by providing funeral services for the city’s dead.

Death was a thriving business venture—one that would never end. Since the asylum, business had been booming.