Zseuss’s Juicy Jams is in trouble. Shy accountant Chrissie loves the firm and steps in when the new head of sales is a no-show. She energizes the sales team as kick-ass Christina, heady with power and keen to make full use of a stunning male intern. With hot sex on tap she plays being boss, ignoring his needs—but with one fatal mistake gets her just desserts! 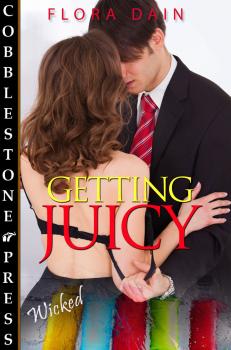 “So…do we do this my way or somebody else’s?” Chrissie beamed at the gaping sales team. She knew her stuff.

Far away from the cut and thrust of active business, she’d quietly helped run accounts for the last two years. She knew the figures backwards, and lately sales had taken a nosedive. Chuck, an old friend and her head of section, was off sick.

He’d been sick for a while. But today of all days it was a disaster.

When she walked in this morning, she had no intention of giving the sales section a pep talk. She was just the acting chief accountant. The owners were coming at the end of the week, and Chuck’s replacement was due in that morning to try a last-ditch revamp—but the stand-in was a no-show.

But hey, she’d never before been this desperate.

She had to be the world’s shyest ever employee, but she loved the company with a passion. She believed in all the products. They were fun, funny, and good for you. But if the company went bust, so would she, together with a whole bunch of colleagues. What would happen to Sheera, with her tricky family issues? Pete, with his patchy prison record? Or come to that, Chrissie from accounts, with her crippling shyness? Here they fitted in, felt valued. Finding work and friends elsewhere would be hard.

“Hi, everybody. I’m Christina.” No one here knew her—sales people considered themselves the crème-de-la-crème, top of the heap. They rarely mingled with the rest of the workforce, and never with accounts. Somehow, her simple report on their plummeting figures, meant to give them a swift run-down on their dip in sales before the new guy turned up, had morphed into an impassioned plea for each and every one of them to get out there and sell.

And to her amazement, they’d started cheering like crazy. In fact, as if she was the new guy. Then it hit her—why not make as if she was? She was full of ideas, full of passion. She knew the company inside out…

But it would be a whole lot easier without some dratted preppy sex-god bugging her every two minutes.

She was already in full flow when she spotted him. He was standing right at the back. The second she laid eyes on him, she’d lost her place, had to re-start her sentence.

Wow. He was gorgeous. Where in heck had he come from all of a sudden? A line-up for some movie audition? Tall, impossibly handsome, carelessly casual, hands in pockets. Politely interested, as if he’d wandered in by chance from some perfume-promo photo shoot.

She’d skipped a beat, and then moved smoothly on. While she talked, her brain went into overdrive.

Who the heck was he? Not on the payroll, for sure. No new names on the staff list that she’d noticed lately. The accounts stand-in? No way. So he was what? An intern? A spoiled rich kid, seconded from some fancy-pants business school to see how the other half lived? Track a failing business in its death-throes?

Huh. She’d show him, gorgeous or not. She’d show him what a tiny company with ethical hiring policies and a commitment to helping people into work could do if it tried…

At least she would if he’d only shut up. But to her fury, he kept on interrupting. Now he was speaking again, his voice deep and rich. Irresistible.

“What about the rumors of a possible infiltrator from a rival firm? Does that worry you at all?”

Jeez, not now, for Chrissakes. The rumors had scared the daylights out of everybody. That was why she was standing here, to try to gee them up, help them forget it. Give them something more urgent to think about closer to home. Something real.

Each time he’d spoken she’d shot him down. Now he was spelling out everybody’s worst fear—just as she’d rekindled the fires that had steadily cooled during Chuck’s long absence. This stranger might ruin everything.

She glared at the newcomer, easy and elegant in his well-cut suit. He had thick brown hair and a steady gaze.

Something about him sent a shiver down her spine. “And you are…?”