Shouldn't all faerytales end with happily-ever-after?

Kyla Ashbury is nearing her eighteenth birthday when a mysterious boy appears at school. Her instant attraction to him inexplicably awakens something inside her and she discovers her true identity.

Now, armed with the knowledge of her past, she is forced to leave behind the life she has always known for a new one filled with temptation, faery charm and magic, and a future she wasn't prepared for.

Kyla is left with a difficult decision…but no matter which path she chooses, someone will get hurt. 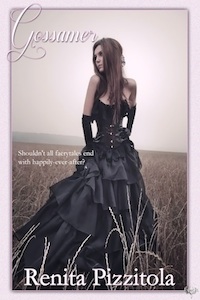 I took several careful steps forward even as my body was reluctant to move. Every instinct told me to turn around, but I had to know what summoned me. I felt a bit unsettled but couldn’t resist.

I approached a large tree, but instead of my usual oak it was an ash. I felt pretty confident this was where the call came from, so I placed my hand on the tree and slowly peeked around it.

She had extremely long, blond hair, almost silvery. The pale strands lay like silken threads down her back in stark contrast to her black attire. She wore a dress with sleeves that puffed at the shoulder then ran tight down to her wrists. The gown tucked in at the waist and billowed out into a full skirt which touched the forest floor. The thick, heavy fabric seemed as if it would weigh down her slender silhouette. Her petite frame looked delicate, and I could tell she was young. She moved her head a little to the side, her hair forming a shimmering veil obscuring any real view of her face. She sensed my arrival and spoke. Her soft, delicate voice drew me in. I took another step forward to hear her better.

How did she know my name? And what did she mean they found me? Did she mean Grant and Conor? They had been looking for me, or maybe she meant Matt. He had found me for The Rite. Either way this wasn’t new information. Yet, I suspected I needed to know something more. Her soothing voice beckoned, and I stepped closer and closer.

Somewhere behind me, I heard a shout. It was a woman’s voice but this one was firm. “Kyla, stop!” I froze at the command. “Turn around!” The voice demanded.

The lady by the tree yanked her head up at a speed no human could match. With her neck craned, she turned her head side to side with quick, sharp, birdlike movements as if trying to place where the other voice had come from.

An uneasy feeling grew within me. Something wasn’t right. I took a careful step backward and a twig snapped beneath my weight. She whipped her head around at the sound. Her white, blonde hair fanned out around her with the rapid motion, finally settling down and exposing her face.