Grab Bag 15 introduces fifteen gay male short stories written by the prolific author, habu, from late summer 2017 through the winter of 2017–18. The stories are published in the order in which they were written and represent inspirations and themes that were working through habu’s mind during that period. Most of them were set in the United States, from the East Coast spinning down from Newport, Rhode Island, to Marco Island, Florida, and then across the continent to L.A. and Las Vegas on the West Coast. Three are set outside of the United States, in Africa, England, and China. Over a third of the stories were written for regional writing contests. Four stories have historical settings, spanning from nineteenth-century imperial China to post-independence Zimbabwe in the 1980s. As usual, habu mulls themes during his collection periods for Grab Bag anthologies. Movies and the Hollywood culture, which habu had a brush with early in his life, often feed his stories, and, with a mountain of sexual abuse charges as a backdrop during this period, three of the stories explore this theme. In addition, habu was playing with the theme of what he calls “porcelain encounters,” or hook-up flashing and sex in restrooms, during the period. The unabashed gay male prostitute is a character that frequently appears in habu stories, and that is no different in Grab Bag 15. We hope that you find the working of habu’s mind and the flourish of his writing in this anthology, the fifteenth of his Grab Bab series, as interesting and satisfying as BarbarianSpy has in publishing it. 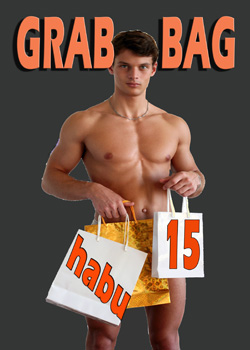