It’s close to Janine’s fortieth birthday and her husband Ricky is keen to find her that extra special present. Reflecting on an event from her school days that she has kept secret; Janine makes a suggestion that at first shocks her husband, but he eventually warms too. Come the big day Ricky presents Janine with her gift, a present that allows her to indulge once more in her past, with the added benefit of experience. They say life begins at forty.

It’s the height of the Middle Ages and the Church is on a brutal mission ridding the world of witchcraft. In the damp and darkened confines of a Monastery’s cellar, a young woman finds herself at the mercy of two monks of the Inquisition. Both are determined to use every torturous method at their disposal to drive the Devil out of this young wench. On hearing of the young woman’s predicament, her fiancé rushes to her rescue only to discover a depravity that shocks him to the very soul.

The Landlady by Primula Bond

Answering the door to a prospective lodger, Linda is surprised to see Robin is a girl. Despite being desperate for young male company, she invites Robin to view the room. Linda soon discovers that Robin has a tale to tell, regarding her hasty exit from her previous digs. Recounting her experience takes them both on a wild journey into a sensuous and wanton landscape.

Three long-time friends reflect on their lives after one of their regular, monthly dinner dates. Their conversations soon turn to topic subject of sex and their heart’s desires. Remembering a distant time, Josie admits to an affair that she once had with her lecturer. Intrigued, Crystal and Greta urge her to confess all. Sharing her intimate memories, Josie regales to the others a particularly racy episode from behind the tutorial door, with a tutor who expects nothing less than perfection. 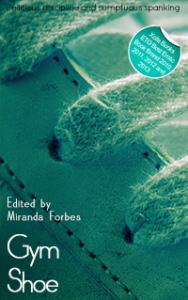 ‘You want me to slap your arse?’
‘No!’ she said trying to keep her composure, lowering her voice to a whisper to stop the people on the table behind eavesdropping.
‘No, I want to dress up as a schoolgirl; you catch me being naughty, then put me over your knee and spank me with a gym shoe!’
‘Where…’ he started and realised he was being loud again and in a whisper finished ‘…did this all come from?’
‘I dunno; just thought it would be a bit of fun, spice things up a bit. You know?’
She had lied! She didn’t like lying to him and did it very rarely but she couldn’t tell him the real reason. She’d kept this secret to herself for twenty-four years, twenty-one of which she had been married to Ricky, and there was no way she was telling him, or anyone, now!
She was sixteen years old and a pupil at an all-girl Catholic school when it happened. It was a very strict environment to grow up in and Janine didn’t always toe the line. One day in a physical education lesson she wouldn’t take her turn on the trampoline, she was frightened but wouldn’t admit as much. When the nuns tried to force her on it she wet her pants. They thought she had done it on purpose and had called for one of the priests to discipline her.
He had told her off and had asked her to apologise to the class, she had been unrepentant, protesting it was an accident. So he pulled a gym shoe out of his back pocket and positioned a chair in front of the whole class. They all sat and watched as he bent her over his knee and pulled down her gym shorts to reveal her bare backside. Then without warning he brought the shoe down hard on her white plump flesh. She had shouted out, in surprise more than pain, it had hurt or maybe stung but not a lot and by the time the third stroke landed it was more of a pleasure than a pain! She had noticed her nipples starting to harden, her clitoris throb and, by the sixth and final time, she was close to orgasm. Being spanked in public had brought out the exhibitionist in her – or would have done – if the opportunity had ever arisen.
It had been her guilty secret all that time, she had wanted to replicate the pleasure but was afraid to ask. Now she’d asked and he was looking at her like she’d gone completely mad!
‘You bored with our lovemaking?’ His voice brought her back to the present.
‘No!’
‘What then?’
‘Oh, nothing, I wish I had never mentioned it!’
The waiter had arrived with the bill at that point and the topic wasn’t mentioned again. Janine thought Ricky had forgotten all about it as he was a bit worse for wear with the alcohol; it wasn’t until her birthday that she realised he hadn’t!
They had both taken the day off work but had got up as usual, so the kids could give their mum her present and sing ‘happy birthday’ before they went off to school. When they were both alone in the house, Ricky brought out another present he’d been hiding under the stairs. It was quite a large box wrapped in birthday paper with a huge bow on the top.
‘What’s this?’
‘A special birthday surprise, hope you like it!’ he said with a wink.
Janine placed it on the table, opened it up and placed the contents next to the box. There was a pale blue polo shirt, a short pleated skirt, a pair of white cotton panties, a pair of white knee-high socks, a pair of white rubber gym shoes and one larger black gym shoe. He looked at her with a wry smile and she blushed.
‘I thought you forgot.’
‘No way, this is what you wanted for your fortieth and this is what you are getting! Go upstairs and get changed.’
She had gathered up all her bits and gone to get changed. He had changed into his best suit by the time she came downstairs and was holding the black shoe, slapping it into his hand in a menacing manner. She had tied her hair into bunches, put on some make-up and felt like a schoolgirl again.