He takes lives. She saves them.

A supposedly hassle-free job for mercenary Cristian Slade becomes a mission of mercy when he saves a life instead of taking one. Slade's new mission might be his most dangerous yet, because the danger is to his heart.

Tragedy has sent esteemed surgeon Alana O'Grady to a remote a remote Nicaraguan island where she immerses herself in the lives of a native American tribe, using her talents for goodwill instead of wealth and prestige. But life turns upside down when her work requires she protect a rugged mercenary who commands her attention when she's awake and dominates her dreams while she sleeps.

Doctoring Christian puts her entire tribe in danger from the man who's hunting him. Is it her professional oath or her unprofessional attraction to him keeping her from sending him away to heal on his own? Alana's fire warms Christian's heart, but he's a hardened assassin and has no business falling for someone like her. Can they fight hard enough to keep what they might have together? 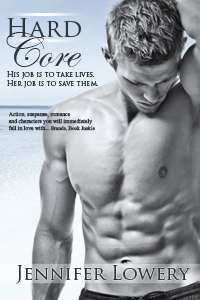 Exhausted, Alana walked into her hut, stripped out of her wet clothes without the aid of a lantern, and left them on the floor. Stiff, sore and plain worn out, she shuffled toward her bed. The storm had injured many, demolished a couple houses, but taken only two.

She already shed tears for Madal and Cendela, wishing they didn’t have to bury anyone, but grateful they weren’t burying more. The storm had passed, leaving behind a warm, humid aftermath. It clung heavily to her skin, making her long for the waterfall, but she was too tired to walk there. All she wanted was her bed and to forget Cristian had come back and then disappeared again.

Confused, she rubbed her aching temples. Why did he come back? But if he hadn’t…

No, not going there. The boy was safe, nothing else mattered. He suffered a broken leg, but he was alive. She would never get the chance to thank Cristian, doubted he’d even listen if she tried, but she would never forget the sight of him standing in the rain, soaking wet and shirtless, muscles bulging.

She swallowed hard and pushed her hormones down. They ran rampant again. They always did when it came to him.

God, she was tired.

“You’ll bleed all over your sheets, Doc,” he murmured from across the room in the darkness.

Alana jumped, hissing out a breath. His voice, so low and husky, so masculine, slid over her and caused her belly to tighten.

Absently, she reached up and touched her shoulder. Warm blood seeped onto her fingers. How did he know she was bleeding? She’d forgotten.

“It’s just a scratch,” she said, distracted by the images that filled her head. Images of a half-naked Cristian helping save that boy’s life.

“You’re not a doctor.” And she wasn’t in any position to be close to him. Her nerves were frayed, her emotions running high. The last thing she needed was for him to touch her.

“Of course. Besides, you’re the one who needs tending. You ripped your stitches, didn’t you?” There would be repercussions from his heroic act, though he’d never admit it.

She didn’t expect him to answer, knew he wouldn’t. Weary, she pulled the blanket off the bed, wrapped it around her like a toga, then reached for the lantern. He wouldn’t let her stitch the wound again, but she could put a bandage on it to hold it together as it healed.

She found the lantern and lit it, illuminating the room in soft glow. Cristian stood in the corner, shoulders braced against the wall. Her breath caught. He seemed larger than life in the small space, his presence as intimidating as his build.

Something dark and forbidden shone in his eyes. Muscles tightened low in her belly. She swallowed past a suddenly dry throat. He’d come back. But why?

She wasn’t aware she’d spoken the thought aloud until his expression hardened. He straightened, pushed off the wall.

“Hell if I know,” he said, low, angry. “Put a Band-Aid on that scratch, Doc.” With that he was gone, walking once again out of her life.