When a mobster with Mafia connections in Detroit, Michigan, accidentally discovers the whereabouts of Jim Bartlett, a contract killer the Detroit Mafia had been seeking, it propels Bartlett and Dominic Ricci, Boss of the Ricci crime family, into a mortal battle with some devastating consequences for all involved.
Bartlett, Ricci, and even Henry Wallace, Ricci's long-time attorney, are all faced with some serious decisions that will affect them in very different, and dangerous, ways. Bartlett could risk the loss of his fiancée, Moira Gray, himself, and even his career. Ricci may risk his life and maybe his status as Boss. And, Wallace may have to give up everything important to him, including his freedom.
Bartlett had planned to end his career on his own terms, marry Gray, and start a new life on a remote and tropical island. Unfortunately, after a very disturbing and unexpected event, Bartlett's life suddenly changes, and not for the best.
Not only does Bartlett's life change dramatically following the event, but Rosa Rodriguez's life changed too. When Rosa Rodriguez, Bartlett's employee and special friend becomes unexpectedly aware of several disturbing developments about him that had unintentionally surfaced, she is faced with a very serious and dangerous dilemma.
Ultimately, it seems highly questionable whether anyone, other than Bartlett, will be able to survive and remain relatively unscathed in the process.

About the Author:
John W. Gemmer lives in Syracuse, Indiana and is a native Hoosier. Following his retirement in 1999, from The Goshen (IN) News as publisher, John was fortunate to have lived part of those years in Naples and College Park, Florida and was an avid Orlando Magic basketball fan.
He is a graduate of Indiana University in South Bend, Indiana, where he received a Bachelor of Science degree in Business.
Gemmer was a member of the United States Naval forces serving from 1968-1972. He was stationed in Norfolk, Virginia and served on the destroyer, USS Harold J. Ellison DD-864. The ship operated in the Atlantic Ocean, Caribbean, and Mediterranean Seas, and was part of the United States Naval Sixth Fleet. While on board the ship, Gemmer journeyed to Spain, Italy, Malta, Turkey, Greece, Puerto Rico, Jamaica, and Cuba. Also, John worked at the Supreme Allied Command Headquarters, United States Atlantic Fleet in Norfolk, Virginia, which is a NATO command and was honorably discharged from there.
John enjoys boating, jet skiing, muscle cars, and street rods, target shooting, reading, watching movies, traveling, and of course, writing. He is an avid University of Notre Dame and Detroit Lions football fan and a Notre Dame and Indiana Pacers basketball fan. Gemmer has one daughter and is a proud grandfather of four. 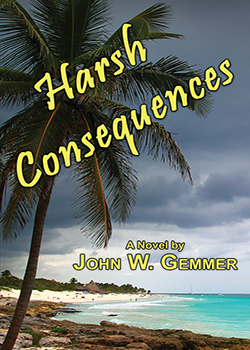