Harvest of the Storm

Beth Jackson successfully farms about five thousand acres of rice, wheat and soybeans. She is well versed in the brutal world of the commodities markets. She battles weather, pests and freeloaders with skill and determination. The man she hires to control a new pest proves to be much more than a simple nuisance animal control specialist. He is polished, respectful, appealing and very exciting. Can she survive the storm now brewing within her heart? 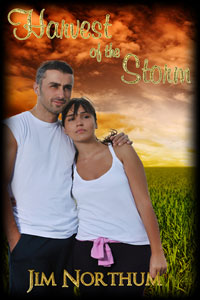 Harvest of the Storm

Beth’s first thought was for Max. He should be here by now, unless something happened to him. She noticed the hound was gone and heard a mournful howl in the distance. The hair on the back of her neck stood on end as the memory of old campfire tales of a howling dog signifying death ran through her mind. Just old superstitions, she thought as the long, drawn howl echoed through the bottoms again.

Still, she hit 911 on her cell phone as she mounted and galloped toward the sound of the hound. She gave the sheriff an approximate location as she rode. The horse loved to run so she thundered along the road skirting thick timber and pounded across open fields. She was no weekend rider bouncing roughly in the saddle, but rather rode as smoothly as any skilled range rider. The next howl came from dead ahead. She rounded a finger of timber to hear the hound behind her. Sliding to a halt, she jerked the rifle from its scabbard and plunged into the swamp, realizing this was where she had felt so uneasy. The almost unearthly howl seemed to come from all around her.

She rounded a thicket to a scene of bloody carnage. Three of the catch dogs lay dead, ripped open by the boar’s tusks. Beth turned her head to the left and there, she found Max…deathly pale and barely breathing, sitting against a tree. Blood oozed from a jagged rip in his thigh, his belt cinched tightly above the wound. The femoral artery must be cut. It’s a wonder he hadn’t bled to death already. She knew to move him without proper equipment would kill him almost instantly. She called 911 with the location and his condition. She knelt in front of him and brushed the hair from his face.

A wane smile fleetingly crossed his drawn face. He whispered weakly, “Beth, I was a fool to leave you. You were everything I could ever want a woman to be and I left. It seems I’m going to leave again. I’m so sor…” and he slipped into the dark world of unconsciousness.