Jaylyn reluctantly relocates with her fiancé to a falling down antebellum mansion on the outskirts of a small Virginia town. Unfortunately he leaves her for his new boss’s daughter and informs her to do whatever she wants with the house and land. She meets Eli Jacobs, a down on his luck farmer, who grew up in the area and loves the old home and surrounding farm. Instead of selling the property, she agrees to hire Eli and together they work to get the place back to its former glory. When Hubert finds out a corporation is willing to pay whatever it takes to secure the land the house is on, he reneges and does everything in his power to thwart their efforts and make their lives miserable. Unfortunately, the house has other inhabitants who at first seem to dislike Jaylyn and Eli, but in the end, prove to be the answer to all their prayers. 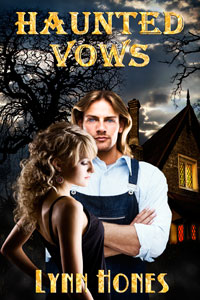 Not owning much in the way of play or work clothes, Jaylyn wore one of Eli’s old t-shirts, cut off just under her breasts. The stretched neck slid over her now tan shoulder and her hair, pulled back in a ponytail at the neck, came loose, strands of her blonde hair sticking to her neck and cheeks. Her cut off jean shorts showed off the bottoms of her firm cheeks and she wore no panties or bra in the heat. He sported only a pair of frayed, cutoff jeans himself and she couldn’t concentrate on the task at hand, he looked so good.

“Damn!” Pulling her hand away from the newly boiled jars, she sucked on her finger. “These puppies are hot.” His non-response confused her, so she turned to see why he didn’t answer. When she did, the look of the hungry tiger radiated from his eyes once again. His bare chest and arms glinting with sweat, rugged, masculine her gaze traveled to his hair, strewn about wildly in the heat. His legs, his bare feet, every inch of him oozed sensuousness, manly perfection.

A cool breeze, out of nowhere, came by and her breasts, flat in the heat, rose, showing through the fabric of the thin t-shirt she wore. Mental telepathy played a part in her removing her shirt and after she did, her bare breasts, small, but firm showed off her perfect pink nipples. He licked his lips and she unbuttoned her shorts, pulling the zipper down slowly. They fell to the floor and she removed one leg and then the other. Another breeze, this one stronger, came through the window and whipped her hair around her shoulders and the once light kitchen darkened and she glanced outside.

“I think a storm’s heading in,” she said softly.

“In more ways than one!” He crossed the kitchen as a flash of lightning struck off in the distance and the boom of thunder it produced banked off the walls. He lifted her into his arms and kicking open the back door with his foot, he brought her into the yard and walked far back into a clearing, laying her down roughly.