With her strict no-dating-within-the-department rule, Firefighter Lina Standish has a nickname in the Salem Hills Fire Department: Lina 'Standoffish'. And she likes it that way. Things on the job could get too complicated too fast when co-workers dated. So she embraced her nickname and kept everyone at arms' length.

But Firefighter Kevin Daly has had his eye on Standoffish ever since a locker room incident nearly a year earlier, and now he plans to break all her rules. With the help of his niece and a hot-air balloon, he gets Lina's attention and she agrees to "hang out" with Kevin as friends off duty, to take it slow and see where things go between them.

Then Lina's life is turned upside down by a surprise miracle who doesn't even have a name. Kevin's ready to step up, but is Lina? 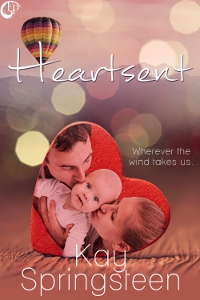 “HERE YOU GO!” Amelia held out a waffle cone with slightly droopy vanilla ice cream and chocolate sprinkles. “Can I go on the Octopus now?”
Kevin surveyed the little girl standing in front of him with a critical eye. Dark brown pieces of deep fried Oreo clung to one corner of her mouth. She’d obviously eaten it in a hurry.
“Are you sure you don’t want to wait a few minutes? Let some of that junk food settle?”
“Uncle Kevin!” Amelia stomped her foot. “You promised unlimited rides. Remember?”
He crouched down to her level to get a better look at her face. “I just don’t want you to get sick on the rides, okay?”
Amelia laid a hand on his shoulder. “I don’t get sick on rides. You know that.”
Then she gave him one of those sun-eclipsing smiles of hers, and he lost his half-hearted protest. He’d do anything for her when she smiled. Unfortunately, Amelia apparently knew that and frequently made use of it.
He stood with a sigh. If the guys knew he could be run so easily by a ten-year-old, he’d never hear the end of it. “Go on, then.”
She continued to regard him, a solemn expression on her face.
“You need something else?” he asked.
“I’m out of tickets. You should have sprung for the unlimited rides wrist band.”
Kevin slid his hand into his back pocket and withdrew his wallet. He pulled out another twenty, glad they’d made a well-timed stop at the ATM before they hit the fairgrounds.
Amelia scurried off, and Kevin turned his attention toward the Sweet Treats concession stand. He took a lick of his ice cream, appreciating the coolness on his suddenly dry throat. Lina bent forward over the counter to hand a swirl of pink and blue cotton candy to a little girl about Amelia’s age. He couldn’t hear what she said, but she kept smiling, and the sight nearly undid his resolve to follow through on the plan.
Only one other person besides Amelia had the ability to get to Kevin with just a smile. And he was staring at her. Lina Standish. She flicked one of her braids over her shoulder before she dipped an ice cream cone. On anyone else, those twin braids falling from the sides of her head might seem tomboyish and adolescent. Kevin only knew he wanted to tug one, and then maybe take them both down. He’d seen her only one time with her hair down. And he’d been looking at other attributes at the time.
Amelia’s small body slammed into him. Wind had ruffled her hair and excitement had painted her cheeks ruddy.
“I’m finished riding for now. Come on.” With strength that amazed him, she pushed him in the direction of the ball field. “You have to go get ready.”
Kevin blinked and concentrated on putting one foot in front of the other. Had he been standing and watching Lina for that long?