A collection of five erotic stories with mixed themes including fem sub, fem dom, older woman/younger man and sex in public. Her First Submission by Bella Marks She’s always fantasised about being dominated, tied up and spanked. And tonight, it’s finally going to happen. She submits for the first time to her boyfriend and newly fledged dom and he takes her on an erotically charged journey she will never forget. A Hot Dixie Fall by Dylan Harper When Mark’s brief marriage to Chloe falls apart, he finds unexpected consolation from Chloe’s mother-in-law, Jess. She might be almost twice his age, but he’s about to discover the charms of this sophisticated cougar are more than a match for those of her daughter … An Exciting Little Game by Elizabeth Black Taking a break from the stresses of her marriage, Drea checks into a hotel with Eric to enjoy a hot and very intimate encounter. When Drea’s nosy friend, Angela, spots them together, will it put an end to this delicious game – or will it add an extra level of excitement? Relight My Boiler by Les Hansom Paul might not be the world’s greatest plumber, but he’s young, fit and very horny, and that’s good enough for Sarah. When they find themselves up close and personal in the attic, her boiler might not be the only thing that gets a thorough servicing … Family by I.G. Frederick Although Master Monica owns Kyle, a bisexual male switch, and Lisbet, a lesbian slave, her family still doesn’t seem complete. Kyle needs a male sexual partner and someone he can dominate. Monica enjoys sexual scenarios involving herself and two men. Kyle finds a young man to bring into the family who seems suitable in all ways but one. The boy is gay, and Monica has to figure out whether (and how) she can make that work. 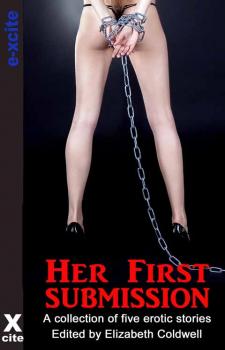 ‘On your knees,’ he said, releasing her. With her hands behind her back it was difficult to kneel. She did so carefully and clumsily.
‘Open your legs.’
She opened her legs as wide as she could, aware of the discomfort in her knees and the way the position of her hands thrust her breasts forward. She fixed her gaze on his shoes, and waited. He put his hand under her chin and lifted it up so that her gaze met his, then let his hand fall, satisfied.
‘Good,’ he said. ‘Now listen. I am going to tell you, once, what the rules are for tonight. Listen carefully or you will regret it. Rule one, and the most important, you will not come without permission. Nor will you speak or move unless I give permission. Rule two, you will obey every command immediately, without thinking. Rule three, you will refer to me as Master. Any transgression of these rules will result in punishment which you will accept without hesitation. Is that clear?’
‘Yes – Master,’ she added, after a slight pause, her voice barely audible. She lowered her eyes as she said the word, half hating him for making her say it, even though it thrilled her to the core.
‘Did I tell you to look at the floor?’ he asked, his voice sharp.
‘No, Master,’ she said with abject misery, keeping her eyes lowered. She felt her cheeks flame. She was mortified that she had obeyed his rules for scarcely two minutes.
‘I will punish you for that, and for hesitating before obeying my command to undress.’ His words increased the aching in her pussy. ‘Stand up and bend over the sofa with your legs spread as wide as possible. Lean on your hands.’
When she was in position he placed a firm hand on one buttock, massaging it and stroking it gently. ‘I will give you twenty strokes,’ he said. ‘You will count each one, and thank me. If you forget, or lose count, I will start again.’
He slipped a finger under her panties, and ran it slowly along her pussy.
‘Wet already, I see,’ he said, tutting in mock disappointment. ‘Bad girl! I’m going to add another five strokes for that, and I’m sure you can guess where they are going to go.’
He rubbed her juices in little electric circles on her clit until he could feel the pulsing that told him she was near her edge. He took his hand away and she whimpered in frustration, her need growing already.
His hand came down, hard and firm on her exposed arse. She gasped.
‘One, thank you, Master,’ she managed to say.
And another. ‘Two, thank you, Master.’
And another, harder this time. ‘Three, thank you, Master.’ The words tumbled out.
She moaned as his hand connected again, lower down, nearer her pussy. ‘Four, thank you, Master. Five, thank you, Master.’
She kept counting, although as the spanking went on she struggled more and more to get the words out. Even through the protection of her panties, the spanking hurt. But a beautiful warmth was spreading through her buttocks and down to her pussy, pooling in her clit. She could feel the wetness between her thighs spreading. He gave her the last five on her pussy.
‘Twenty-five, thank you, Master.’ Finally, it was over, but disappointment washed over her. She longed for him to continue spanking her pussy. One more would have made her come.
‘Get up!’ he ordered.
He attached restraints to her wrists – nice, soft ones, for which she was grateful – and fastened them to something above her head. To what, she did not know. A hook of some kind? It was just long enough to allow her to stand, but she was almost on tip-toe.
‘Beautiful,’ he said, standing back to admire his work.
He kissed her on the mouth and she returned his kiss, hungrily, wanting more. She felt his hand slip into her panties. He had placed something against her aching pussy. Suddenly, the thing came to life. It was a little vibrator, buzzing against her clit. Now she realised why he had let her keep her panties on. They were getting rapidly wetter and she pressed her legs together, embarrassed.
‘Open your legs,’ he said. He attached a spreader bar to her ankles, which increased her torment and pushed her up on to the balls of her feet.
‘Don’t you dare come,’ he whispered. She knew that when the time came she would not be able to help herself. All day her pussy had been aching, and she had promised him that she would not give herself release. She wished now that she had done. Although she would probably have confessed it to him, and been punished. She squirmed, trying to relieve the pressure. It was no use. Her panties held the vibrator firmly against her clit and within minutes she was on the edge of orgasm, fighting it with all her might.