In the fall of 2004, Marine Corporal, Danny Shaunessey, is bound for the war in Iraq. Fearing that he could die in combat, he embarks on a mission to lose his virginity prior to deployment.

Beth Kelly is an animal-loving veterinary technician looking for a gallant hero. The Marines are always looking for A Few Good Men. Beth’s only looking for one. A stray kitten brings them together. But after a few idyllic days together, war pulls them apart.

Her Innocent Marine is an old-fashioned romance with a touch of eroticism. It’s also a gritty and graphic portrayal of the realities of war. War destroys both bodies and minds. Can it also destroy love? 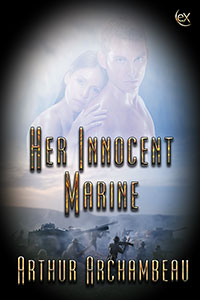 “Love to hear me some tunes. Do me a favor, bro. Should be a CD right under your seat. Mind passin’ it over here?” Ritchie reached under the passenger seat of the black 1996 Barrington Opulence Signature Series luxury sedan and pulled out a jewel case. He was getting ready to hand it to Danny when he stopped and examined Danny’s handwritten track listings. It was a custom music CD that he had burned and titled Danny’s Romantic Interlude.

“Damn, dude!” Ritchie said, “You have got to be shittin’ me. Every fuckin’ song on this CD is about love and getting in touch with your feelings and all that bullshit. In other words, a CD full of... chick songs. Jesus H. Christ! Are you sure you’re still straight?” Waving the CD in front of Danny’s face, Ritchie continued his merciless assault. “This shit right here, dude—this is why you’re a fuckin’ twenty-three-year-old virgin, and probably the only one in the entire fuckin’ Marine Corps!” Ritchie cracked up at his display of ball-busting.

Danny tried to defend himself, “Give it here, asshole. I like songs about love. I don’t care what you think, and for your information, the reason I’m still a virgin is because I believe in romance and I’m shy around women. I had been looking for something special, something more than just casual sex. You got a problem with that, Private First Class Antonelli?” Ritchie’s schtick was wearing thin on him.

“Oh, so you’re pullin’ the fuckin’ rank card on me now, huh, Corporal Shaunessey? Mother Green gives you those two chevrons over those crossed rifles, and suddenly you got a hard-on for power and an air of superiority over us E-2 Neanderthals. Nonetheless, I’ll overlook that for now so as not to lose focus on the mission at hand—we got ninety-six hours to get you laid. That’s entirely doable so long as you don’t get hung up on emotions and shit like that. Highly motivated Marines can do anything they set their minds to. Hell, the Corps raised Old Glory over Iwo Jima, so it sure as fuck can help you score one lousy piece of ass. Shit, boy, when we get to the club, we’re gonna get you hooked up and then I’m gonna go find me a Big Booty Judy who can clap it, or a Yummy Mummy, maybe both. Trust me, when these chicks find out we’re headed overseas, we’re bound to at least get some pity pussy. And I, for one, ain’t above accepting pity pussy. Fuckin’-A!” Ritchie grinned a shit-eating grin, lit up a Wellington cigarillo, and sank back in his seat.

They were on a four-day liberty from the Marine Barracks, Eighth and I, Washington, DC, so they decided a minivacation in Ocean City, Maryland, was their best bet since regulations limited how far they could travel. After that, they were being deployed to Iraq. The war. Or as it was called In Country, The Show. Danny was determined to lose his virginity prior to the deployment so he’d enlisted Richie’s counsel to help him get laid. He had struggled with this issue for some time now, but deployment to a war zone added a sense of urgency. After all, who wanted to get their balls blown off by an IED before ever having a chance to put them to use?

Ritchie was still feeling his oats. “Yo, check it out—in honor of our impending deployment and the popping of your cherry, I made up this running cadence for you. You have your very own personal cadence, bro. I laid in my rack last night and spit out this rhyme.” Ritchie channeled his best cadence-calling voice.

“How long did it take you to come up with that, Rich?”

“About three hours, while I was watching Reverend Love’s Preach-A-Thon.”

“It’s beautiful, man. Fuckin’ beautiful. It made me laugh. It made me cry. You should be the Poet Laureate of the United States Marine Corps.” Danny shook his head in disgust.

“You know, Danny, you should watch Reverend Love, too. That motherfucker can preach up a storm. Watchin’ him on television counts as goin’ to church. That means that I can sin to my heart’s content tonight. I’m covered.”

Danny suddenly remembered an important talking point that hadn’t been broached yet. “What’d you think of wrestling this week?”

Ritchie became animated. He laughed and clapped his hands. “You see Pig Pen Pete dump that big bucket of shit from his outhouse on The Trailer Park Warlord’s head? There’s gonna be some hell to pay for that at The Crucible pay-per-view.”