"Homeless queer kids – and they are legion – too often find themselves ostracized and silenced. In Zane Thimmesch-Gill they have finally found a strong, clear voice.” --Riki Wilchins, author of Read My Lips, GenderQueer and Queer Theory, Gender Theory

In the memoir, Hiding in Plain Sight, this transgendered author describes in graphic and harrowing detail a homeless teen life on the streets that was marked with constant violence. Amidst the daily struggle to survive, she slowly came to the realization that she hated her body just as much as everyone did. When she was honest with herself she’d always known that she was meant to be a boy.

Despite the intense pressure of street life and having to come to terms with the fact that she was a transsexual, Kali never used drugs or alcohol, never committed a single crime, and never gave up on her dreams to make something out of her life. While the rest of the street kids were escaping into addiction, she figured out how to put herself through college and finance a sex change.

Life slowly improved as Kali became Zane and started settling into his body. He eventually found work at a shelter for homeless youth and started to make friends. But his euphoria was short lived. A resident at the shelter knew that he was a transsexual and became obsessed with making sure everyone found out. A few gang members who were living in the program confronted Zane, and when he was too scared to admit the truth, they decided to get their boys together late one night and prove him wrong.

Hiding in Plain Sight is a transformative and ultimately inspiring story of survival against all odds, of pursing and accomplishing your dreams in spite of enormous and often seemingly insurmountable obstacles. 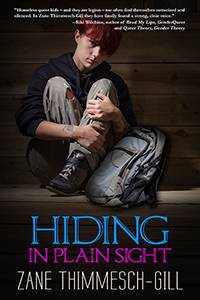