These original tales run the gamut, exploring both the champagne fizzle of an unexpected flirtation to romance that's still smoking after all these years. Join us on a sleigh ride making stops from Mexico to Main Street and who knows... perhaps even your place. After all, you may not have heard everything about Santa coming down the chimney. 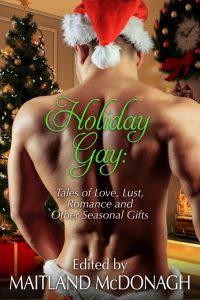 Bells all over town began to ring: At midnight New Year’s Eve became New Year’s Day and firecrackers were crackling and sparking all over town. A handful of children began waving colored sparklers and then it was 12:01 and I jumped up and said, “Look, let’s go get a drink. We can’t just sit here and be miserable all night…”

At the bar was a group of gregarious, boisterous, super-slender and handsome young Mexican men. They asked if Jon and I would buy them Tequila shots and we did. And then we bought them another round and then they bought us one. And then the alpha boy, who was beyond handsome with his deep brown eyes and thick lustrous head of shiny black hair brushed straight back off his forehead, moved in very close to me and murmured, “Tomorrow, you come to see me fight the bull?”

Oh, brother, what a line! It seemed to come straight out of some 1940s Carmen Miranda movie. When life, art and kitsch are indistinguishable, it’s hard to know what to say or do next.

And then Flavio put his right arm around my waist, pulled me forward, bent me backwards and planted the warmest and deepest kiss on my lips I’d had in… well, I don’t even know how long. I definitely wasn’t dead... So, Jon and I just had to agree that we’d come watch Flavio fight the bull tomorrow. (Three Cars, Two Miracles and a Matador)