Holiday In the Heart 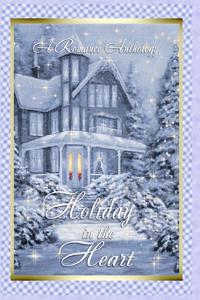 Holiday In the Heart

This is a terrific collection of stories that sets the mood for ringing in the holiday spirit with warm loving feelings, faith and charity. You can't miss with this lovely fine-tuned collection with a bit of something for everyone's taste.

Eight stories that would put even Scrooge into the Christmas spirit. It does not matter what TYPE of romance genre you prefer. This book has a little bit of everything. The stories are set in the U.S.A. and Europe. Some take place in the past, some in the present, and one story takes place in both! I strongly suggest that you put on something comfortable, brew up something hot (tea, coffee or cocoa will do), light up a fire, settle down somewhere quiet and begin reading this anthology.

This holiday compilation is a perfect way to escape from the frantic pace of the holiday season. There is a little something for everyone between these pages. Let the lass's of Highland Press entertain you with their magical tales of love. Perfect for a holiday gift.

CHRISTMAS WONDERLAND by Leanne Burroughs - When Samantha Noelle was talked into replacing her friend Monique as one of Santa's helpers at Nickels Department store she was less than thrilled with the divinely handsome store manager who laughed at her in her green elf costume. Sam thought Mr. Giovanni should have been called Mr. Grumpy and would have liked to just stay out of his way but his precocious young daughter was going to show them both how much they all needed one another. *** Burroughs has an incredible voice whether writing a Scottish historical or a contemporary love story.

SEMPRE by Aleka Nakis - When you're young you often make unwise choices and Amanda, standing all alone on Christmas Eve had reason today to regret the choice that changed her life. Not all of it, after all she had her son Jason just not the man who captured and still held her heart today. Yet, when Marco appeared on the observation deck with her perhaps miracles could happen and she would have a second chance at love. *** A lovely sweet story that proves once again that love is the best miracle of all -- any time of the year.

CHRISTMAS MASQUERADE by Michele Ann Young - The Earl of Dart had no use for Christmas so buried himself chopping firewood at his gamekeepers cottage. Seeing a vision coming thru the blowing snow he first thought he'd died and went to heaven, but more likely she was just another damsel looking to ensnare him in a parson's mousetrap. Well, she'd find out he wasn't about to succumb to her feminine wiles, but then again, maybe she really didn't know who he was. On the other hand wouldn't he be surprised to learn who she was as well? *** Ms. Young writes a lovely tale of two people fate was kind enough to bring together on a snowy Christmas Eve. Well done and a sweetly sensual tale to take the chill off a cold and snowy night.

THE CHRISTMAS CURSE by Rachel Michaels - All her life it seemed Jenna was a walking disaster around the Christmas holidays. Just once - one time - could she have a pleasant Christmas? Well, it was worth a shot to wish on a star, just this one time and maybe magic could happen. *** This was a very cute story proving sometimes wishes do come true. Sweet.

RACHEL'S LIGHT by Victoria Houseman - As governess to Samuel Stein's children Rachel Levine knew her place yet couldn't help but wish to take away the pain and bitterness she saw in Samuel's beautiful eyes. Samuel was bitter over what life had dealt him after losing his wife and the pain from his mangled leg but most of all hated that he hurt Rachel with his drunken tirades, a lovely gentle young woman who deserved better. *** Houseman writes a powerfully beautiful love story of redemption as a gentle young woman brings light and promise to man who once thought his life bleak.

THE GREATEST GIFT OF ALL by Candace Gold - After having been jilted by her fianc Claudia wasn't in the mood to go to any dance but once there met a guy too good to be true. Things progressed nicely until he was called up to serve in the Iraqi war and Claudia's world fell apart again when he was reported MIA. *** Well written and emotional - have the tissues handy! Lovely.

VICTORIANA by Heather Hiestand - Hiestand has come up with an exceptionally creative and original story when Robyne Arthur, a young woman stumbles upon an old Victorian `cracker' and is transported from Tacoma, Washington to Victorian England. Only it's an England that has been frozen in time. The Earl of Chester points out that Robyne holds the key to saving them but she would forfeit any chance to return home. The more she gets to know the kindly Earl of Chester, she may just decide that staying with him is where she wants to be. *** Loved this very original time travel from the very first pages. A step back into Victorian England. Sweetly satisfying.

BLUE CHRISTMAS CAT by DeborahAnne MacGillivray - Dara Seaforth had loved Rhys St. John since she was eleven years old - still remembered the one and only kiss she'd given him at eighteen. When on Christmas Eve and Dara was more lonely than ever, a stray cat with a name tag of Elvis showed up on her doorstep. Rhys had returned to the village and been looking for a reason to approach Dara. Following his silly cat's tracks through the snow he was overjoyed to discover they led straight to Dara's door! ***This was a charming little story that proves that someone is bound to listen when one's heart is pure to grant special wishes at Christmas time. MacGillivray writes with a pleasing sensual voice and wonderful character development for both human and feline.