Hollywood Lesbians: From Garbo to Foster

"Fans of Hollywood's golden age will find this collection of interviews conducted over many years revealing...an enlightening picture emerges of Tinseltown, different from that presented in the fanzines." ¬Publishers Weekly

"The book is more than it seems because these women are great talkers." ¬Booklist

"I was curious about 'Hollywood Lesbians.' I have now read the book. I am still stunned." ¬ Bea Arthur of "The Golden Girls"

Hollywood Lesbians: From Garbo to Foster is the companion volume to Boze Hadleigh’s classic Hollywood Gays. In this rare and no-holds-barred collection of exclusive interviews with Hollywood icons from the Golden Age of movies and TV—Dame Judith Anderson, Barbara Stanwyck, Capucine, Ann B. Davis, Nancy Kulp, Sandy Dennis, Agnes Moorehead, Edith Head, Patsy Kelly — among others—renowned entertainment journalist and historian Boze Hadleigh goes straight to the source and opens the film world’s closet door into the past, and brings this volume full circle to the present with new material. 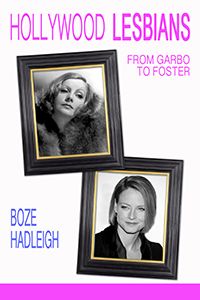 Hollywood Lesbians: From Garbo to Foster

Though [Barbara] Stanwyck didn’t do talk shows or reveal herself publicly, during her final, emptier years she was said to desire attention and a reminder of her silvery past. Ergo her acceptance of my interview request, which would never have gotten past Helen Ferguson. Conversations with My Elders (in later years retitled Celluloid Gaze) proved that I knew old movies and was sometimes in awe of their creators. I’d once glimpsed Stanwyck at the Robinson’s department store in Beverly Hills and been disappointed by how short she was (like so many screen legends) but impressed by how youthful her face looked from a distance. After she turned a corner I became impressed by how much power she’d been able to radiate from such a small frame, the force of her personality consigning height to insignificance. Like Bette Davis, she was technically an old lady but still and all a compelling and intimidating presence.

Thus when our 2:00 appointment at her home on Loma Vista Drive in 1987 was moved to 2:15, I feared being late. Or early. And when, on the phone, she’d asserted, “Let’s forego questions about my films and roles,” I wondered to myself, then what will we talk about?

I correctly guessed that I wouldn’t get a second chance. I wondered if she might terminate the interview if I got too close to the topic of her true sexuality, for I took with me a clipping from a 1981 issue of a newspaper called the Hollywood Star. It was a list of 70 reportedly bisexual actresses.

To my surprise, that didn’t end our interview, or conversation. Something else did.

I explained that I myself had not compiled that list…